Posted by Thomas Shevory at 1:16AM 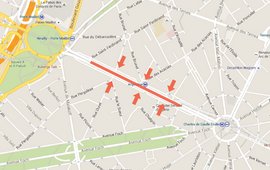 Here are a few random thoughts and observations while waiting to hear about a final agreement.

I went to a presentation Thursday by the U.S. on the President’s Climate Action Plan.  It included a number of officials from various government departments, including EPA Director, Gina McCarthy. The contrast was quite marked from what I experienced in 2005, in Montreal. The panel there was composed of business leaders, including high level execs from Alcoa and General Motors.  That they were hostile to the process would be an understatement.

Things have obviously improved under President Obama, but there was a rah, rah, self-congratulatory quality to the presentation that I felt was inconsistent with what the Action Plan actually accomplishes.  By contrast, a presentation by the Nordic Group that I attended earlier in the day, which was composed primarily of Danes, was very understated and businesslike (a scene right out of Borgen). Denmark actually is a world leader in carbon free energy production.

I attended my first Fossil for a Day ceremony Thursday.  Climate Action Network has been giving out these awards since the early days of COP.  The EU received both 1st and 3rd place for the disconnect between ambitious stated goals versus actual actions in the talks. Second place went to “all countries in the world,” because they hadn’t stepped up yet to reach a meaningful agreement.

Before it started, organizers handed out sheets of paper with the names of countries, and asked that everyone that held one to come up to the stage to be part of the ceremony. I was Belize.  We sang, chanted and waved our sheets for the press.  It was a welcome moment of levity in the midst of all the seriousness.

At a side event sponsored by India on Friday, which included government officials and business leaders, one participant stated out loud what many people are probably thinking: In order to keep to a 2 degree C target, much less 1.5, technological breakthroughs in energy production will have to be made, ones that we don’t know about yet.

Also on Friday, a NASA scientists made a presentation on visually modeling global carbon dioxide and aerosol release, gleaned from satellite and other data. The results, projected on a large ultra high definition video screen, were mesmerizing. The U.S. has long been a world leader in climate science, if not climate politics and policy.

Mid afternoon, I  joined a demonstration by civil society in which we all held a long piece of red cloth in the walkway between the two main pavilion buildings.  We chanted “equity,” “justice,” “ambition,” and “zero emissions,” while slapping our chests to the rhythm of a beating heart.  It was fun and moving.

I  then snuck into a “press only” press conference held by the Climate Action Network to get the latest update on negotiations Friday afternoon.  The panelists expressed what I would describe as a cautious optimism. The main outstanding issues, as of this writing are:  financing (of 3rd world mitigation and adaptation measures); keeping a reference to a 1.5 target, which one panelist described as “the fire that drives the agreement;” putting some teeth into monitoring efforts; keeping offsets, “which we haven’t had a good experience with,” out of the agreement; some reference to loss and damage; and a meaningful (five year) periodic review of the INDCs and the overall greenhouse gas target.

Right afterwards, and next door, the "high ambition coalition," led by Tony de Brum, foreign minister of the Marshall Islands,  along with reps from the  EU, Germany, and Norway, also held a press conference.  I arrived a little late, so had to stand in the back of the packed room.  When de Brum announced that Brazil had joined the coalition, people broke into applause.  He expressed a degree of concern that attempts were being made to undermine crucial elements of the agreement, but also seemed to hold a degree of cautious optimism.  I noticed that The New York Times mentioned this event in this morning's coverage.  .

We were notified via email Friday that our passes were automatically extended for one more day, given that negotiations are still ongoing. The latest word on the UNFCCC website is that the final draft will be released today at 11 AM.  I am somewhat torn.  On the one hand, I would like to be there for the formal release of the final document, but civil society is holding a mass demonstration on the streets of Paris at noon today.  I plan to attend that instead.