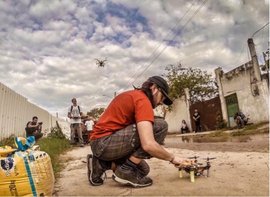 Aerial Mapping of Vila Autódromo is composited from twenty photographs taken by a drone at the altitude of 300–400 meters between 9:00 and 10:00 in the morning on 15 August 2015 above the community of Barra de Tijuca in the West Zone of Rio de Janeiro (Brazil). Pablo de Soto & Lot Amorós used aerial drones to document the struggle of a community under threat by neoliberal urbanization related to the 2016 Summer Olympics.

Unlike Rio’s favelas, where structural inequality often crushes dreams, Barra de Tijuca is promoted for its lovely beaches and high Human Development Index (HDI) by the United Nations, which quantifies having “a long and healthy life, being knowledgeable and have a decent standard of living."

Lúcio Costa’s masterplan for Barra de Tijuca deploys a faith in modern progress, much like the one he devised for the Brazilian capital of Brasília. What Aerial Mapping of Vila Autódromo shows, however, is community organization against the neoliberal turn in urbanism in the form of a cultural festival titled #OcupaVilaAutódromo.

Within Barra de Tijuca is the favela of Vila Autodromo, which was slated for destruction as part of gentrification schemes to facilitate real-state developer profit during the 2016 Summer Olympics. Fishers and construction workers settled Vila Autodromo during the 1960s and 1970s.

The project was realized with #DroneHackademy, a temporary hacktivist school, citizen science laboratory and critical theory platform for the use of unmanned aerial vehicles (UAVs) as a social technology, in June 2015 in collaboration with MediaLab.UFRJ and support of the Latin American Studies Network on Surveillance, Technology and Society (LAVITS).

Pablo de Soto is an architect, artist, and activist with a Ph.D. in Communication and Culture from Federal University (Rio de Janeiro) and an MA in Architecture from Royal School of Technology (Stockholm). He is cofounder of hackitectura collective, editor Fadaiat: Freedom of Movement, Freedom of Knowledge and Situation Room: Designing a Prototype of a Citizen Situation Room, and publisher of After.video Assemblages. His radical cartography includes Critical Cartography of the Straits of Gibraltar, Gaza Cartography, 15M Maps, Mapping the Commons, and #DroneHackademy in collaboration with artist Lot Amorós.