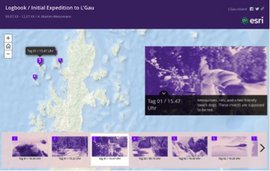 Described as “part fiction, part online gallery, and part discursive publication,” L’Gau (The Wandering Island) is the story of one woman’s passage through the Dangerous Ground in the South China Sea.

Despite being poorly charted, the Dangerous Ground is a major nautical trade route between the eastern Spratly Islands and Palawan Island. The sovereignty of many of the islands is disputed by Brunei, China, Philippines, Taiwan, and Viet Nam, due to their richness in fish and gas.

Named after the Prussian explorer Alexander von Humboldt, Alexandra logs a four-day expedition towards the Spratly Islands. Her vision has deteriorated due to photokeratitis (flash burns from staring at the sun), so that images appear tinted an unnatural violet and mark a contrast with the vibrant and crisp aerial images on ArcGIS map through which users navigate the project.

Each image is tagged with Alexandra’s enigmatic logbook comments, which suggests that she has previously been to these places yet evidence what Cabildo calls “small-scale surveillance, data noise, and the threat of physical disintegration.”

Alexandra moves into the past where she becomes entangled in tourism, maritime conflicts, and the effects of climate change.

Michelle Angelica “Mica” Cabildo lives in Metro Manila, where she studied advertising and printmaking. In 2014–2015, she was a fellow for Visual Communications/Design at Akademie Schloss Solitude in Stuttgart (Germany). She employs digital and print image-making techniques to explore public art strategies. Her current work is about storms, islands, and letters, which can be viewed on her website.