Maps to the In-Between 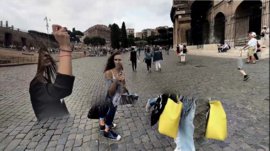 Maps to the In-Between

The video revisits streets and intersections, ancient and modern ruins, animating images from satellite photography with tilts and pans. Movement through a mediated world evokes the surveillance made possible by ubiquitous CCTV cameras.

The video mines online data, available on commercial mapping programs. The images reveal seams between composited images, as the digital and networked interface reveal itself as screen grabs from Google Street View with the visible cursor, layers of text, and pedestrians caught unawares.

Locations are revisited and reinvestigated through tilts and pans. Sometimes glitches sever limbs or heads; other times, facial recognition software applies blur filters to make face anonymous. The video searches for points of entry in-between the frozen images of photography, under the disconcerting ambient sounds of wind and traffic.

Katya Yakubov is an Uzbekistan-born filmmaker living in Richmond (Virginia), United States. She graduated from NYU’s Tisch School of the Arts and served as assistant curator at VAEFF (Video Art and Experimental Film Festival) in 2013. Her short films have screened at Alchemy Film Festival, Milwaukee Underground, EFFPortland, and various other festivals. From 2014 to 2015, she and partner Daniel Hess opened a microcinema in Brooklyn called The Picture Show. Her artistic practice explores how a stable view of time and fixed notions of identity can be undermined by photographic, abstract storytelling.