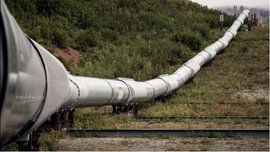 Whereas romantic painters, poets, and composers imagined the undying sublimity of nature and hoped to recover it from the age of science, the advent of the Antropocene has exposed the vulnerability of nature to human whims.

Topophilia’s title evokes the climbing term “topo” for guidebooks or maps of climbing routes, alerting audiences to the use of such knowledge towards more overly harmful enterprises. It also evokes topos, the Greek term for the construction of an argument, and philia, the Greek term for love and friendship.

The film tracks the nearly 1300-kilometer Trans-Alaska Pipeline System (TAPS) through time-lapse photography that forms a rhythmic analysis of the precarity of human and nonhuman life, which may burn away as permanently as fossil fuels that we use to power our automobiles — and also generate the energy needed to power our air conditioners, refrigerators, and computers.

Gorgeous views of snow-covered mountains and valleys are punctuated with images of elk grazing beside the petroleum pipeline, evoking the toxicity and permanent damage of the oil industry on our environment.

TAPS is also a legacy from the so-called oil crisis of the 1970s when the Organization of Arab Petroleum Exporting Countries (OAPEC) exerted political power through boycott in an effort to get the United States to democratize its military policy in the Middle East. TAPS is thus a self-destructive monument to the end of the so-called American Century.

The film provides a ghostly reminder of what is at stake in political action against a pipeline proposed through the Standing Rock Indian Reservation in North Dakota and South Dakota (United States): indigenous rights, human rights, environmental rights.

Peter Bo Rappmund is a Dallas-based artist, who has directed three feature-length films: Psychohydrography (2010), Tectonics (2012), and Topophilia (2015). He holds a MFA in music composition and film/video from CalArts, and he is on the faculty at the University of Texas.