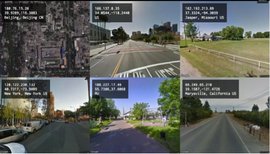 Ben Grosser’s Tracing You imagines how a website might see the world from the viewpoint of its users.

Images range from “eerily accurate” to “wildly dislocated,” as Grosser explains. Tracing You makes visible the invisible traces that website users leave behind as they visit. It constructs a kind of user profile that documents ways that artificial intelligence of software can sometimes know us better than we know ourselves.  Or, at least, it is more aware of the world outside the rooms where we sit transfixed by our computer screens.

The project also documents the limitations of computational surveillance systems. When users receive images of cities labeled with the numerical strings of foreign IP addresses and the user is not using a proxy server or VPN (virtual private network), Tracing You traces the user’s virtual location.

More significantly, the project places this image in the lower right of the screen beside five other images, representing the physical locations of five other users and visualizing the effects of surveillance. The user watches five counterparts and, in turn, is watched by them. Everyone can trace the physical location of everyone else.

Ben Grosser focuses on the cultural, social, and political implications of software. Recent exhibition venues include Eyebeam in New York, Arebyte Gallery in London, Galerie Charlot in Paris, and Museum Ludwig in Cologne. His projects have been featured in Wired, The Atlantic, The Guardian, and Der Spiegel. Grosser’s recent recognitions include First Prize in VIDA 16. He is assistant professor at the University of Illinois. Grosser’s projects have been included in two previous FLEFF exhibitions: ScareMail in Viral Dissonance (2014) and Computers Watching Movies in Iterations as Habitats (2015).