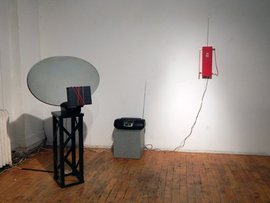 Dale Hudson is an associate professor of Film and New Media at New York University Abu Dhabi, author of Vampires, Race, and Transnational Hollywoods, and co-author of Thinking through Digital Media: Transnational Environments and Locative Places. His essays appear in Afterimage, American Quarterly, Cinema Journal, Media + Environment. Screen, Studies in Documentary Film, Studies in South Asian Film and Media, and elsewhere. Since 2007, Hudson has been digital curator for the Finger Lakes Environmental Film Festival (FLEFF). He also coordinates films from the Gulf for the MESA (Middle East Studies Association) Film Festival for the Association for Gulf and Arabian Peninsula Studies (AGAPS).

Claudia Costa Pederson is Assistant Professor of Art History at Wichita State University and Assistant Curator of New Media for the Finger Lakes Environmental Film Festival at Ithaca College. She has contributed to multiple journals and edited volumes on film and media. Her book Gaming Utopia: Ludic Worlds in Art, Design, and Media is forthcoming from Indiana University Press in 2021.

At a moment when no aspect of our daily lives seems safe from the infiltrations of surveillance and monetization, radical infiltrations can challenge inequitable systems.

Rather than attacking systems from outside, radical infiltrations attack from within. When we inhabit systems, we can work against their structures of power and claim common spaces.

Infiltrations still also function as a strategy for the right, as we have seen when governments move toward fascism through democratic elections in Brazil, Hungary, India, Israel, Italy, the Philippines, the United Kingdom, and the United States. Populist nationalisms aggregate the grievances of large populations of citizens, who have been disempowered and even disenfranchised after decades of liberal and neoliberal economic policies, through viral media campaigns and onsite rallies.

Popular uprisings in Chile, Iraq, and Lebanon have responded to the implementation of neoliberal policies that enable the destruction of the planet. In activism and academia, new approaches to thinking and acting environmentally challenge antiquated ideas about growth, development, and progress. They become radical infiltrations of state and institutional structures moving towards substantive transformation.

For this year’s festival, we sought projects that explore radical infiltrations in our natural, built, and virtual environments that contribute to broadening perspectives and promoting dialogue in our politically polarized climate. The global climate crisis is not just ecological but cultural as well.

Within the context of increasingly asymmetrical power dynamics, radical infiltrations engage guerilla tactics, asking us to consider how compartmentalized thinking helped to create contemporary problems and how the infiltrations of radically interdisciplinary thinking might alternatively draw upon indigenous, embodied, or affective forms of knowledge production.

The two of the three projects selected for jury prizes, Amelia Marzec’s Weather Center for the Apocalypse and Yoav Lifshitz’s Occupy WiFi Project offer alternative networks for communication that are improvisational and provisional. Unlike the expanding power of transnational corporations like Google, Amazon, and Alphabet, these new networks hack old and new technologies to allow us to communicate with one another without the manipulations of profit-driven algorithms.

The third project awarded a jury prize, Roger Beebe’s Amazonia, asks us to think about the damage e-commerce does, not only to its workers, but to the environment because of the massive amounts of energy required for server farms.

Two other projects selected for the exhibit, studioThirdWorldCollective’s Capital and Kailas Sreekumar’s Maut (Death), are short videos that examine the damage done by neoliberal economic and political policy in India, the world’s largest democracy. The videos are calls to action, encouraging us to fight systems that drive humanitarian crises and accelerate ecological devastation.

Alternatively, Vera Sebert’s Journey to the Planet of Nuclear Chewing Gum and Jodi Zellen’s Photo News, suggest ways to repurpose information, whether news or propaganda, that infiltrates our daily lives. In particular, they ask us to question long-held beliefs about progress.

The seven projects in this year’s exhibition invite us to consider our responsibility to one another. We need to communicate more openly and make opportunities for others to communicate. We need to resist manipulation by corporations and states. We need to develop the means of opposition and resilience that will prevail against these systems. Finally, we must join together to infiltrate the systems of power before they destroy us.