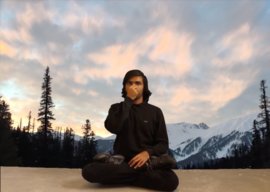 Kailas Sreekumar is an emerging multi-disciplinary artist based in Bangalore (India). As a keen observer of socio-political developments, Sreekumar makes works that are often responses to events and phenomena happening around him. In 2018, he completed his Bachelor’s in Creative Arts with a major in Contemporary Art Practices from Srishti Institute of Art, Design, and Technology, Bangalore, and in 2019 he earned his Master’s Degree in Contemporary Fine Art from the University of Cumbria (UK).

As the world’s largest democracy, India has become increasingly antidemocratic under the leadership of the BJP (Bharatiya Janata Party) and Narendra Modi, which enact anti-Muslim policies, including the 2019 repeal of Article 370 (ensuring a fair division of power to Kashmir and Jammu), the 2020 passing of the Citizenship (Amendment) Act (excluding Muslim refugees from becoming Indian citizens), and the proposed National Registry of Citizens.

These measures have been met with large-scale protests by Indians of all religions who hope to preserve democracy.

A young man assumes the lotus position, allowing for deep breathing, yet pinches his nose, suggesting suffocation. The BJP even appropriates the lotus position to advance its extreme rightwing agenda. Behind him as snow-covered mountains evoke a typical setting for the song-and-dance sequences popular in Hindi cinema.

Maut, the Hindi word for death, asks us to consider how Gandhi’s nonviolent and secular ideas of nation can become confused with fascist ideologies that infiltrate thinking and have consequences like the death of democracy and the deaths of Indian citizens.