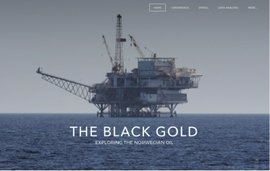 The Black Gold by Nicole Defranc and Katrine Skipper

Born in Ecuador, Nicole Defranc graduated with a BA in Journalism and French from University of Łódź in Poland and is currently pursuing a MA as an exchange student at Høgskolen i Volda (Volda University College) in Norway. She also completed an internship at TVN Łódź in Poland, where she produced short episodes on cultural differences.

Katrine Skipper is a student in Multiplatform Storytelling and Production ​at VIA University College in Denmark, where she was born, and was an exchange student at Høgskolen i Volda (Volda University College) in Norway. She is currently doing an internship at Dokumentarkompagniet, where she produces documentaries for national broadcast on TV2.

The Black Gold – A Web Documentary

The Black Gold – A Web Documentary offers an online platform for users to investigate the history and politics of Norway’s oil industry, which has contributed to its state wealth, and imagine ways to maintain Norway's economic stability while safeguarding the environment.

Discovered in 1969, oil from the Nordic Sea accounted for 52% of Norway’s exports in 2012. The national oil fund has been valued at five billion Norwegian kroner (more than 600 million US dollars or European euros), which calculates to more than a million kroner per citizen. Despite what the media encourages us to believe, oil wealth is not confined to Gulf Arabs.

The documentary includes pages of information on Greenpeace, the international environmental organization that operates in 55 countries, including Norway, and on Statoil, the Norwegian-based multinational petroleum company. It also includes interviews with Truls Gulowsen of Greenpeace Norge and Erik Haaland of Statoil, who convey their goals and aspirations of ending oil dependency and transitioning to renewable energies that protect the environment for future generations.

In addition to these qualitative modes of analysis, the documentary includes quantitative information in the form of interactive charts and graphs. By looking at investment categories, percentage of renewables in gross electricity generation and consumption, and other factors, the documentary provides a complex analysis that provides useful when considering the environmental policies of Norway’s two main political parties — De Grønne and Høyre — which are included on the documentary website.

This project was selected for a jury prize.