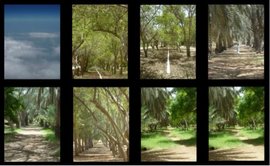 On the Road by Naz Shahrokh

Born in Iran and educated in France and the United States, Naz Shahrokh is a visual artist who lives and works in Abu Dhabi (United Arab Emirates). Her arts practice involves photography, drawing, video, and installation to locate connections between societies and individuals. Like a storyteller or a poet, she assembles visual narratives that are visually attractive and socially revealing. Shahrokh has exhibited her work internationally and received awards, including the Change Inc. Grant from the Robert Rauschenberg Foundation in Captiva (Florida) and the Artist in the Marketplace (AIM) Fellowship from the Bronx Museum in the Bronx (New York).

Naz Shahrokh reinterprets the U.S. writer Jack Kerouac’s 1957 novel On the Road as a video. Her version, titled Be fekret hastam in Arabic, opens with a black screen and the sounds of what might be splashing water or footsteps on sand before global fusion music and ambient sounds of birds chirping begin. Eight images appear in a grid. The square in the upper left corner contains an image of the blue sky; the other seven contain images of roads and paths between trees. The video charts the invisible geographies of the contemporary Arabian Peninsula, a place where sea and desert meet, a place filled with oases and wadis (valleys), a place where diverse cultures have cohabitated and exchanged ideas for millennia.

The music invites meditation about what the images evoke more than contemplation of their content. Bahramji and Maneesh de Moor’s “Dreamcatcher” is a fusion of different musical instruments from the santoor, a stringed instrument from Iran and parts of South Asia, whose roots can be traced to ancient Mesopotamia, to electronic sounds that no physical instrument can make. The song’s Persian-language lyrics reflect Bahram’s childhood in the Kurdish city of Kermanshah in Iran, where he was inspired by Sufi melodies. The song also reflects his later travels and education in India and Europe, particularly the collaboration with the Dutch musician Maneesh de Moor, who plays the electronic keyboard. Like Kerouac and his fellow Beat poets, Bahram and de Moor are travelers, whose interests reside in sonic experiences.

Most of the images show roads within the lush greenery of an oases or orchard — built environments with trees. The roads are not paved but lined with date palms and ghaf trees, two species that survive in the desert and offer canopies of shade to its inhabitants. The trees indicate deep sources of water and bear fruit and flowers. Indigenous to the Peninsula, ghaf trees stabilize sand dunes otherwise prone to erosion. Some of the images include a solitary figure walking leisurely along the roads, embracing every step. The video closes with a single image of waves in the gulf that shimmer as they reflect the sunlight.

The images are immediately comforting to anyone raised on the Arabian Peninsula and perhaps parts of the Middle East and North Africa. For everyone else, they reveal geographies that might not be visible on a short visit. In some ways, their composition evokes the fascination of U.S. Abstract Expressionists such as Mark Rothko, with Zen Buddhism. Simultaneously, the image is also mediated through the lens of Beat poetry. By weaving these transcultural movements into the video, On the Road asks us to slow our pace and take notice.