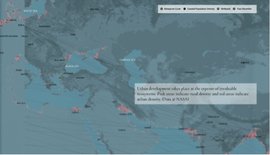 The Shore Line by Liz Miller

Liz Miller is an independent documentary-maker, trans-media artist, and professor at Concordia University in Montréal (Canada), who lived in Central and South America for more than six years. She is committed to producing work that connects individuals across cultures. Over fifteen years of community media experience and a background in political economics, electronic media art, and Latin American studies fuel her exploration of new media as art and as an educational tool for community collaborations.

Described as “a storybook for the future,” The Shore Line conveys ways that 43 people, living in the urban cities and remote islands of nine countries, have confronted the world’s problem of rising seas and violent storms due to global warming. Although the conditions affect all of us, they affect us in different ways.

By navigating between chapters, databases, and an atlas, users learn about the innovative ways that people have managed the effects of climate change. Moreover, they can navigate by tags, including people, country, threat, language, and a strategy toolkit. Under people, users can select by occupation — activist, architect, artist, biologist, communication, and so forth — allowing them to locate ways that they might contribute to their own communities based on their own particular skills and talents. On the atlas, users can track their paths, see the paths of other users, access the videos, and look at datasets to analyze how population density threatens mangroves and wetlands

In the video “A Floating Future,” for example, architect Mohammed Razwan explains creative solutions for rural communities in the Natore District of Bangladesh. For instance, the children are given solar-power lamps, so that can study at night despite a lack of electricity. In addition the problems caused by flooding, many farmers are landless. A solution has been to move to the water, with floating vegetable gardens, duck coops, fish enclosures, and even housing — something that has allowed increased female participation in income-generating work by moving families closer to it. While their parents work, children go to school, but the school also comes to the children on a traditional boat modified to contain a classroom. The ingenious solution allows children to continue their education during monsoon season when flooded streets and buildings caused many children to drop out. By clicking on the “toolkit” tab, users are directed to a page with comparable solutions in other locations.

In “Protectors of the Mangroves,” high-school student Reyna educates her peers and her parents about the vital role of mangroves in Panamanian ecosystems. From Indonesia, “The Chiliwung River” offers an example of how to save a river from pollution and transform it into an eco-park that facilitates education and biodiversity. Local organizer Bang Kodir’s intervention is situated within Indonesia’s capital of Jakarta.

Other videos show work that remains to be done. “A Sinking Island” tells the story of Ioane Teitiota, who is among the first climate refugees to arrive in New Zealand from Kiribati, which is projected to be the first nation to be submerged by rising sea levels. In New Zealand, after three years of battling the courts, Teitiota and his family were deported. Elsewhere, artists Michael Singer and planner Jason Bregman combine forces to restore the ecosystem in the inter-coastal waterway near West Palm Beach in the United States. Along the way, they faced highly financed opposition by residents of the luxury apartment towers who feel that their views have been destroyed. In reality, the construction of the towers has contributed significantly to the environmental devastation throughout Florida.

The Shore Line also includes ominous images of possible futures. An image of the intersection of Water Street and Wall Street in New York City, for example, shows the rising waters of the East River joining those of the Upper Bay until most of lower Manhattan is underwater. When users click on the image, another pre-flood picture appears, offering an idea of what would be lost in this case. What is not necessarily visible is that this neighborhood is home to many of the transnational corporations that lobby against eco-friendly policy.

This visualization, as well as a similar one for Miami, suggest how people in affluent communities are not preparing, knowing that in the event of flooding or destruction by storm, they could simply move elsewhere. These images reveal a telling counter-narrative to the ones of resilience and empathy that Miller finds among communities who are both more vulnerable and less privileged economically, politically, and socially.

The project includes workshop cards and include activities and suggested readings that can be downloaded by users. It also includes an interactive map that allows users to see visualizations of areas with wetlands, mangrove cover, and dense coastal populations to identify how coastal density impacts the very ecosystems that protect communities from storms.