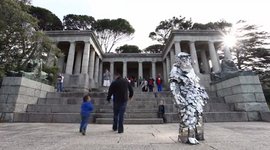 Taking its name from the slang expression “mongo” for object thrown away and later, Cape Mongo follows the journeys of five mythical “trash creatures” through Cape Town.

Each character emerges from the city’s growing dumps of consumer waste. In their journeys, the Mongo creatures “revisit the spaces of their imagined pasts — the locations associated with their material existence and the constitution of their social relations — as if walking against the consumer-driven currents of city,” explains Knoetze.

Moving between desolate shipping-container yards and the bustling streets of the Bo Kaap, between concrete shopping malls and the green spaces of suburbia, their journeys not only reveal the life cycles of consumer goods but also reveal the endemic inequality and social alienation of modern Cape Town.

The videos combine documentation of live performances inside wearable sculptures composed entirely from waste and found footage on issues of housing, food security, inequality and racial segregation under the Lacrimosa movement from European composer Wolfgang Amadeus Mozart’s Requiem (1791–1792). The lyrics — “Lacrimosa dies illa / Qua resurget ex favilla / Judicandus homo reus” or “Mournfully be that day / On which from ashes shall arise / The guilty man to be judged” — convey the possibility for recuperating from the wreckage that Europe released upon the world in Mozart’s lifetime.

Francois Knoetze (South Africa) learned to value seemingly useless objects, watching his grandfather repair broken appliances, toys, and furniture in Grahamstown, South Africa. He specializes in assemblage sculpture, using trash and other discarded objects as a creative medium in projects that incorporate performance and video. His projects explore the personification of things and the objectification of persons by retracing the life-cycles of objects — beginning as trash through domestic spaces, freight trains, factories, farms, and shops — to present an expansive account of value systems, networked processes, and social relations responsible for the commodities that we accumulate.