Spore's Ytubesoundscape and His Wildlife 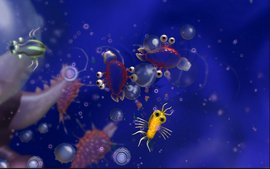 Spores Ytubesoundscape and His Wildlife

Additional information on the project:  www.rgbproject.com

Spore’s Ytubesoundscape and His Wildlife crowd-sources audio effects posted on YouTube by users of the popular online multiplayer fantasy god-game Spore (2008), which allows users to develop creatures from microscopic cells to social organisms, evolving from creatures to tribes to civilizations that explore outer space.

The soundscape conveys the living virtual environment of a game world, where new species emerge daily, in contrast to our own environment, where species extinction now occurs in catastrophic proportions.

It also prompts us to think about the mediation of “wildlife,” some species of which exist only as DNA samples in archives or living samples in zoos after human destruction of their habitants and the planet as a whole.

Mauro Ceolin (Italy) is a multimedia artist based in Milan, whose projects and research since 1996 have focused on representing contemporary realities, aesthetics forms, and experiences of convergence culture. He has participated in prestigious art exhibits and venues throughout Europe, the United States, and Brazil.