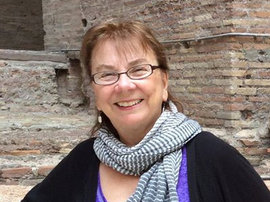 Barbara Adams is associate professor of writing at Ithaca College; her specialties are feature journalism, nonfiction, and arts criticism. She has been a regional theater critic and arts journalist for four decades, co-organized Ithaca’s longstanding film festival Women Direct, and serves as FLEFF literary programmer. As a founding member of Ithaca City of Asylum, she has served as advisory board chair and, most recently, edited Raza Rumi’s collection of essays on Pakistan.

Waves of refugees from wars, civil upheaval, economic distress, and natural disasters remain a current humanitarian crisis. Among those in need are writers, journalists, scholars, and bloggers who have been censored, harassed, imprisoned, and even tortured and executed for their expressed beliefs.

In 1993, responding to assassinations of Algerian journalists, a group of distinguished and outspoken writers –– including Salman Rushdie, Russell Banks, Jacques Derrida, Vaclav Havel, Wole Soyinka and others –– united to found the International Parliament of Writers (IPW). Their goal, in defense of human rights and freedom of expression, was creating a network of cities of refuge for endangered writers. Supported by city governments, some 25 havens proliferated, largely throughout Europe.

Since 2005, IPW’s work was continued and expanded by the International Cities of Refuge Network (ICORN), centered in Stavanger, Norway. Today, 60 cities worldwide offer protection to writers, and more recently, all artists.

In the U.S., the first city of refuge was established in 2001 in Las Vegas, followed that same year by Ithaca City of Asylum (ICOA) in Ithaca, New York, and then by Pittsburgh City of Asylum. (ICOA’s first writer arrived the devastating week of 9/11.) Other U.S. attempts have begun and faltered, and only two North American cities in the ICORN network currently offer writers sanctuary: Ithaca and Pittsburgh.

Elsewhere efforts are often backed by local government, but U.S. ventures have been funded either by individuals or in conjunction with universities. Thus, ironically –– despite extensive models and materials available through ICORN –– one of the richest nations provides much less than it could for writers at risk.

Ithaca’s organization began with significant assistance from Cornell University and continues with primary support from Ithaca College, where the visiting writer has a two-year teaching position as international scholar-in-residence. Cornell still contributes generously, and local and national grants, along with individual donations, allow ICOA’s work to continue.

With nonprofit status as a social change project of the Center for Transformative Action (a Cornell affiliate), ICOA faces the same funding challenges as most nonprofits. The organization contributes financially to the resident writer’s moving costs, housing, furniture, legal fees, and travel. Writers accompanied by family are helped ­in finding employment for a spouse or locating schools for dependent children.

ICOA annually hosts Voices of Freedom, a multi-author reading in conjunction with Banned Books Week. Past programs have featured other exiled writers, such as Khet Mar (Burma) and Israel Centeno (Venezuela). ICOA also participates in the community’s Spring Writes festival and sponsors readings, lectures, panels, films, and musical events throughout the year. And ICOA and its writer have a long-lasting relationship with the Finger Lakes Environmental Film Festival.

ICOA publishes two chapbooks of the writer’s work during the Ithaca residency –– ranging from poetry and memoir to plays and political essays. The two-year position affords the writer the opportunity to live, write, and publish in relative safety and to connect with other writers. Nevertheless, all the complicated hardships of exile remain –– maintaining identity, purpose, and community while separated from one’s homeland.

A glance at just two of these writers suggests the diversity of their situations and the urgency of their need.

Reza Daneshvar, from Machad, Iran, was a novelist and regional theatre head whose outspokenness resulted in his censorship, imprisonment, and torture –– first under the Shah and then under the Islamic Republic. Released in 1982, his life threatened, Daneshvar fled to Pakistan and then to France, where for 22 years he supported himself and his two sons by driving a taxi.

Brought to Ithaca in 2004, Daneshvar finally had the time to write, producing two new plays (Sandwich Deluxe and Alfred) and several short stories during his residency. He also taught theater courses at Cornell and helped organize an academic conference featuring leading dissident Iranian writers and artists. Daneshvar eventually returned to France and continued writing for online publications until his death in 2015.

ICOA’s fifth writer (2012-14) was Sonali Samarasinghe, a human rights activist and award-winning journalist. While practicing law in Sri Lanka, she worked as an editor and journalist focusing on government corruption and human rights. In 2009, she and her family left after the assassination of her husband, a high-profile attorney and publisher. Once in the U.S., Samarasinghe continued their work by establishing The Lanka Standard, a website reporting on Sri Lankan events and advocating freedom of the media. She was one of three exiled Sri Lankan journalists featured in Norwegian director Beate Arnestad’s documentary Silenced Voices.

While in Ithaca, Samarasinghe taught media, journalism, and human rights at Ithaca College. She also organized a distinguished international speakers series, gave multiple public talks, and published a collection of poetry and a memoir. Since the recent political shift in Sri Lanka, the murder of Samarasinghe’s husband is finally under investigation, and she now serves as Minister Counsellor in the Sri Lankan mission to the United Nations.

Though Samarasinghe’s safety still depends on which party is in power, she is at present able to revisit her homeland –– the exception for most writers in exile. For ICOA’s current writer, Raza Rumi, who survived an assassination attempt in Lahore in 2014, the threat remains active.

For 15 years, Ithaca City of Asylum has provided its writers a refuge and temporary home, the freedom to write and publish, and a bridge to community. The writers in turn have brought us their enormous talents, generous personalities, ethical leadership, and global consciousness. This mutually enriching experience deserves to be replicated throughout resource-rich America. And the need to support endangered writers has only increased –– as Reza Daneshvar noted, “All over the world there are hundreds of wandering writers who defend the sovereignty of words against the lies of power.”