New Media, Collaboration, and the Anthropocene by Dale Hudson and Claudia Pederson 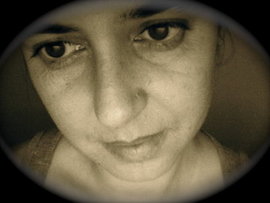 Dale Hudson teaches in the Film and New Media Program at New York University Abu Dhabi (NYUAD), where his research and teaching focus on globalization and culture to frame questions on transnational/postcolonial migrations, environmentalisms, and structural inequalities. He is author of Vampires, Race, and Transnational Hollywoods (2017) and co-author with Patricia R. Zimmermann of Thinking through Digital Media: Transnational Environments and Locative Places (2015).

Handheld devices, wearable cameras, streaming media, and a plethora of small consumer-grade digital technologies call for a reassessment of experimental media. This shift in digital technologies reverberates with notions of the Anthropocene—defined as our current geological moment when human activity drives environmental crisis.[1]

For over a decade, artists in FLEFF new media art exhibitions have moved from the early work of net.art on desktop monitors to experiments with automated data collection, storage on clouds, hacked game engines, and multiple layers of data visualization and presentation through alternative reality (AR) apps with an emphasis on collaborative forms.[2]

An early example of collaborative experimental media with an environmental orientation is Scott Draves’s Electric Sheep (1999–present), an open-source screensaver for download. The project is computer-generated and human-selected.

Electric sheep are actually fractal flames—elastic clusters of luminous light that act as screensavers. The project’s administrators, or “shepherds,” maintain a constant “flock” of approximately 100 sheep. Users shape the flock by submitting new parameters for sheep, voting on extant ones, or “mating” them by combining fractal codes of two different sheep. Electric Sheep interrogates the Anthropocene by asking players to create and mutate life forms and foregrounding how the computational and the biological entwine.

The crochet reef forms are based on the technique of “hyperbolic crochet,” a simple pattern or algorithm, which on its own produces a mathematically pure shape, discovered in 1997 by mathematician Daina Taimina. Varying or mutating this algorithm produces endless variations and permutations of shape and form. [3]

The project works by aggregation. For example, its exhibition at the Smithsonian Museum of Natural History in 2010–2011 involved over 800 contributors from the Metropolitan D.C. area, around the United States, and the world. Participants created over 4,000 pieces of crocheted coral for the exhibit and helped construct the reef. The Smithsonian Community Reef is only one of many satellite reefs created by communities around the globe. This ongoing project is perhaps one of the world’s largest participatory art pieces.

Crochet Coral Reef revitalizes the connection between craft and technology and reminds us of the irreparable damage of global warming and ocean acidification in the form of coral bleaching. The crocheted coral blooms are both incredibly fragile and resilient.

Rooted in tactical media, PigeonBlog (2006) is a project created by the late artist Beatriz da Costa. She collaborated with homing pigeon trainers to outfit pigeons with sensors that monitored air pollution in San Jose, California. The project featured a website mapping their findings, circumventing top-down data distribution much like citizen science. [4]

Typical air quality monitoring involves installing fixed devices at sites located away from traffic and other highly polluting sources using mathematical models to predict air pollution levels. In contrast, the PigeonBlog proposed mobile readings taken as the birds fly over an area. This data truth-checks the models to determine a more accurate picture of pollution levels. As with Electric Sheep, PigeonBlog imagines how new technologies can facilitate horizontal forms of knowledge sharing.

Sprinkle and Stephens instigated a transnational ecosexual movement by locating queer ecology in the Anthropocene. Ecosexuality foregrounds the environment by positing the earth as a life/sex partner, thereby humorously commenting on retrograde notions of queer sexuality as a monstrous relation. In Goodbye Gauley Mountain Sprinkle and Stephens created a communal wedding to the Appalachian Mountains, which they promised to honor and cherish.

Like contributors in Electric Sheep, players of the online videogame Never Alone/ Kisima Inŋitchuŋa (Upper One Games, 2014), interact with one another. The game offers players the perspectives of two different species: they have the option of selecting the human avatar for a young Iñupiaq girl named Nuna or the canine avatar for Fox.

The videogame is a collaboration between Iñupiaq game developers, artists, and storytellers in Alaska with the New York-based game publisher E-line. By combining scrimshaw-inspired graphics and native folklore with 3D animation, Never Alone supports the community’s financial independence and educates players about the challenges of global warming. Players unlock stories from elders that convey how the world is ordered and our place in it, intervening in Western notions of human dominance over the environment and suggesting that knowledge in the Anthropocene is useless unless shared.

Taken together, these new media arts practices mobilize different kinds of collaborative relationships while simultaneously requiring participants to think about the environment and our relation to it in new ways. New media interrogations of the Anthropocene require unraveling how social, environmental, and mediated dynamics interact with each other across borders, whether geopolitical ones used to define states or scientific ones used to distinguish species..

New media art projects exist both in and with the world. These projects prioritize thinking conceptually rather than representationally about complex ecologies. Instead, they act and think through digital media.

These digital projects do not emerge from the self and its subjectivities—they are participatory, collaborative, and connect the human and the non-human in new ways. Ecological new media are developed from a relationship with both the commons and the Anthropocene. [5] These projects are not the monologues of individual artists; they speak alongside the environment and its occupants, as a chorus.

[1] For an example of how theorists have been interrogating new ideas about humans and the environment, see Donna J. Haraway, Staying with the Trouble: Making Kin in the Chthulucene (Durham: Duke University Press, 2016). Much early experimental film emphasized romanticized subjectivity. Films evoked the environment through human-centered impressionism, as in Joris Ivens’s Regen/Rain (1929), or surreal encounters, as in Man Ray’s L’Étoile de mer/The Starfish (1928). The prolific U.S. experimental filmmaker Stan Brakhage affixed dead insects and dried leaves to film strips in Mothlight (1963) and The Garden of Earthly Delights (1981). Like earlier experimental filmmakers, Brakhage largely ignored the environment outside his own imagination. Jane Bennett has argued that the materials that make physical computing possible are vibrant matter, defined as that which can potentially alter not only our brain waves but also our body chemistry. See Jane Bennett, Vibrant Matter: A Political Ecology of Things (Durham: Duke University Press, 2010). Also see, Dale Hudson and Patricia R. Zimmermann, Thinking through Digital Media: Transnational Environments and Locative Places (New York: Palgrave Macmillan, 2015).

[2] Inaugurated in 2006 with ecopoetics, curated by Timothy Murray and festival co-directors Patricia Zimmermann and Thomas Shevory, FLEFF’s online exhibitions now span more than a decade. FLEFF itself was launched around the time when the World Wide Web opened the internet to users outside U.S. military operations and research universities.

[3] Special thanks to Jill Magi for bringing this connection between crochet and computing to our attention. For scholarship, see: J. Gozde Kucukoglu and Birgul Colakoglu, “Algorithmic Form Generation for Crochet Technique: A study for decoding crocheted surface behaviour to explore variations,” eCAADe 2013: Computation and Performance—Proceedings of the 31st International Conference on Education and research in Computer Aided Architectural Design in Europe (Delft, Netherlands: Faculty of Architecture at Delft University of Technology, 2013): 273–278.

[5] The commons refers to planetary resources that are not privately owned, such as air, land, and water. Global warming and species extinction have been driven primarily by the destruction (or “use”) of the commons by human activity, that is, the Anthropocene, Commons movements include the Movimento dos Trabalhadores Sem Terra (MST, or Landless Workers’ Movement) in Brazil and the Narmada Bachao Andolan (NBA) in India. The commons also refers to various cultural, digital, and intellectual resources.