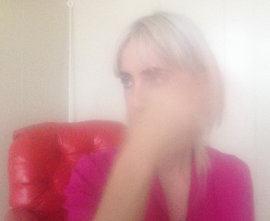 Stephanie Barber is an American writer and artist. She has created a poetic, conceptual and philosophical body of work in a variety of media. Her videos are concerned with the content, musicality and experiential qualities of language and her language is concerned with the emotional impact of moments and ideas. Each ferry viewers through philosophical inquiry with the unexpected oars of empathy, play, story and humor.

Barber’s films and videos have screened nationally and internationally in solo and group shows at MOMA, NY; The Tate Modern, London; The Whitney Museum of American Art, NY; The Paris Cinematheque; The Walker Art Center, MN; MOCA Los Angeles, The Wexner Center for Art, OH, among other galleries, museums and festivals.

Her videos are distributed by Video Data Bank and her films can be found at Canyon Cinema and Fandor.com. Her books Night Moves and these here separated... were published by Publishing Genius Press in 2013 and 2010 respectively. Her collection of very short stories All The People was published by Ink Press Productions in 2015.

James Glisson at Artforum wrote "...the films of Stephanie Barber engage universal themes—time, death, memory, forgetting, frustration." and Ed Halter at Afterall Online wrote "Barber...approaches cinema as a philosophical toy, intimately small, in which the play itself generates both pleasure and insight."

Barber is currently a resident artist at The Mt. Royal MFA for Interdisciplinary Art at MICA in Baltimore, MD