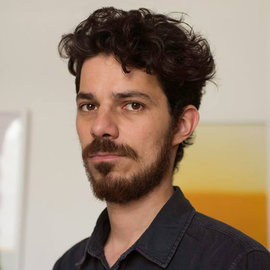 Manolo Márquez (Fellow) is an artist and educator based in Mexico City. His artistic practice explores photography’s dialectic nature as image and object. He holds an MFA in Imaging Arts from Rochester Institute of Technology. His recent projects have taken the form of bookworks, analog color print portfolios, image-text work, and bilingual writings. His book Eres un Fantasma (2016) is an exploration on how objects become symbolically charged traces of human gestures when in the public space. His work has been exhibited in galleries and fairs such as Almanaque Fotográfica, Galería Progreso, Material Art Fair, and Zona Maco Foto. After two years spent as a Fulbright scholar in Rochester, NY, he moved to Mexico City in 2012. He has since organized independent exhibitions and workshops that have brought artists from both countries together. His downtown Mexico City studio is one of the few running analog color darkrooms in Mexico, in which he has produced analog C-prints for Museo Nacional de Arte, Centro de la Imagen, and has collaborated with visual artists and collectives. As an educator, he has taught photography and image theory in the Digital Media Design BFA program at CENTRO (2013 -2017) and he currently teaches bilingual arts and photography at the American School Foundation in Mexico City.