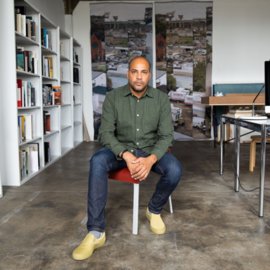 David Hartt (Faculty) (b. 1967, Montréal) lives and works in Philadelphia where he is an Assistant Professor, in the Department of Fine Arts at the University of Pennsylvania. His work explores how historic ideas and ideals persist or transform over time.

Recent solo exhibitions include in the forest at the Graham Foundation and My Building, Your Design: Seven Portraits by David Hartt at The Art Institute of Chicago. Additionally, his work has been included in several group exhibitions including Ocean of Images: New Photography 2015 at The Museum of Modern Art, America Is Hard to See at the Whitney Museum of American Art and Hedges, Edges, Dirt at the ICA in Richmond. His work is in the public collections of The Museum of Modern Art, New York, Whitney Museum of American Art, New York, The Studio Museum in Harlem, New York, The RISD Museum, Providence, The Art Institute of Chicago, Museum of Contemporary Art, Chicago, The Museum of Contemporary Photography, Chicago, Henry Art Gallery, Seattle, The National Gallery of Canada, Ottawa and The Stedelijk Museum, Amsterdam. In 2018 Hartt was the recipient of both a Pew Fellowship and a Graham Foundation Fellowship, in 2015 he was awarded a Foundation for Contemporary Art Grant, in 2012 he received an Artadia Award and was named a United States Artists Cruz Fellow and in 2011 he received a Louis Comfort Tiffany Foundation Award. Hartt is represented by Corbett vs. Dempsey, Chicago, David Nolan Gallery, New York and Galerie Thomas Schulte, Berlin