Cool Courses: The Archaeology of Food

What do the following have in common: vegemite, jackfruit, cockroaches, and seaweed? They are all foods commonly eaten in different parts of the world, although many Americans find them distasteful, smelly, or downright taboo to eat. These are also all foods that students sampled during the spring semester course called Archaeology of Food. Paula Turkon, assistant professor of anthropology, used these foods to illustrate that nutrition is not the only consideration when it comes to deciding what to eat. In fact, she says, “cultural factors are inextricably linked to what, how, where, when, and with whom people consume food.”

Students definitely absorbed this lesson: Aya Hoffman ’12, an anthropology and television-radio major, noted, “In class, we discussed how the human body can process many more types of materials than our culture would actually deem edible. It’s kind of ironic to me that in American culture we would never even think of eating insects or grass for sustenance, but we don’t think twice about putting potentially more harmful chemicals into our body.”

The course focused on the approach that archaeologists take to understanding the “food ways” of past societies. In addition to sampling exotic foods, students had many hands-on opportunities to help them gain a better understanding of the methods used by archaeologists to determine what and how people ate in the past. For example, one project had students try their hand at cutting meat off chicken legs using stone tools. Not only did students develop an appreciation for the skill needed to create and use stone tools, but in the next class they used those same butchered bones to learn how to interpret cut marks, an important type of evidence of bone modification that archaeologists use to study butchering patterns and early hominid tool use. Students were enthusiastic about their experience in this unusual class. “You never know what you’ll eat or learn about every day in this class!” said Mara Engel ’09, anthropology minor.

Rebecca Grollman ’10, an anthropology and physics major, concurred: “This class changed the ways I look at food, and now I’m more willing to try new things.” But David Bevilacqua ’10, anthropology major, put it most succinctly: “We ate bugs and blew up rocks in a fire—education at its finest!” 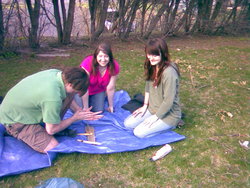