Walking the Walk: Psychology Research In and Out of the Lab

On most days, members of Research Team 3 and their adviser, Mary Turner DePalma, professor of psychology, can be found in the lab, crunching statistics and analyzing data about the psychological impact of diabetes. But sometimes research doesn’t go the way you expect, and this year students found themselves at an impasse. DePalma explains: “Research team is an incredible opportunity for the students to learn a variety of research and statistical skills. But the skill we are learning right now is patience—and that research has its own timetable, one that is difficult to predict and control.”

Patience may be a virtue in research, but the students were anxious to help people with diabetes right away. And that’s why, on a gray and rainy Saturday morning this past October, these student researchers ventured out of the lab and into the great outdoors, walking through Green Lakes State Park in Fayetteville, New York, to raise money for diabetes research, education, and advocacy in the American Diabetes Association Step Out to Fight Diabetes Walk. According to team members Becky Zaremba ’09 and John Metzger ’10, “We felt we had been cooped up in the lab for too long. We wanted to get to know more about the individual people our research could benefit in the future. So we decided to embark on a different kind of active and important contribution to the circumstances we were working so hard to improve.” For the last three years, students on DePalma’s research team have been exploring the psychological dimensions of disease management, specifically focusing on diabetes. Using a combination of laboratory and field techniques, the students have been trying to understand what psychosocial attributes influence the way people manage the disease. In the first phase of the research, students discovered that feelings of anger and perceptions of self-blame had a negative impact on disease management, while social support had a positive one. Because their sample consisted exclusively of non-Hispanic white respondents, however, they were concerned that this model might not be generally predictive, especially since diabetes disproportionately affects minorities such as Native and African Americans. When they studied the same question with a Native American sample, the results revealed that their initial hypothesis was not sufficiently sensitive to important cultural ideals and beliefs. After incorporating those elements, their theoretical model had more predictive power. They then decided to expand their respondent sample to include a Latino population to explore the cultural dimension more completely.

But that’s where the progress ended. “Despite months of hard work, numerous newspaper advertisements, e-mail list announcements, and telephone calls,” explained Zaremba and Metzger, “our sample size remained inadequate for a proper statistical test of our hypotheses.” The students were understandably disappointed since they had not been able to learn anything new or to add to their long-term goal of helping people with diabetes. Nonetheless, there was a lot of learning going on—research team is that kind of experiential learning opportunity that exposes students to the risks and uncertainties associated with real-world situations; in this case, they learned a great deal about the research process, as they had to figure out ways to adapt to and negotiate this unexpected obstacle. DePalma noted: “These students have displayed considerable effort for small returns, and they just keep going back to the table to design alternative methods of data collection. I am quite proud of how they, despite the slow progress, are keeping their focus on the end goal, and they just keep plowing on.” She added: “But these students in particular wanted to have a more immediate impact in helping people with diabetes.”

And that’s how they came to be in the raindrenched woods in October. In the end, the team members raised more than $1,600 (the second highest team total). “After three miles, lots of mud, and a lot of laughs, we finished the walk as a team,” said Zaremba and Metzger. “It was a fantastic bonding experience, and the people we met along the way highlighted the importance of the scientific work in which we are currently involved.” 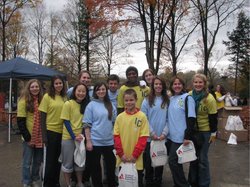