ITHACA, NY — Historian Wendy Lower will present “Hitler’s Furies: German Women in the Nazi Killing Fields” at Ithaca College as part of the annual Holocaust Lecture series. Free and open to the public, her talk is scheduled for Monday, Oct. 26, at 7:30 p.m. in Clark Lounge, Egbert Hall.

The author of a book of the same title, Lower will speak about German women who worked in Nazi-occupied Eastern Europe during World War II and facilitated the genocide of the Jews. Drawing on twenty years of archival and field work on the Holocaust, the book builds a convincing picture of a morally “lost generation” of young German women who — swept up in the nationalistic fervor of the Nazi movement — took part in some of the worst atrocities.

Lower is the John K. Roth Professor of History at Claremont McKenna College and a research associate at the Ludwig Maximilian University in Munich. A historical consultant for the U.S. Holocaust Memorial Museum, she has published numerous articles and books on the Holocaust, including “Nazi Empire-Building and the Holocaust in Ukraine.”

For more information, contact Rebecca Lesses, coordinator of Jewish studies, at rlesses@ithaca.edu or (607) 274-3556. 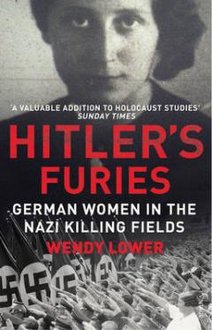