As John Jacobsen ’17 navigated through the crowd to the podium, Jacobson’s mom, Cookie, took a deep breath, fighting back tears that dared to cascade down her cheeks.

For graduating students at Ithaca College, this scene often unfolds in the days leading up to Commencement, as students and their families gather for celebrations and reflections.

For Jacobson and Cookie, the moment held added significance. 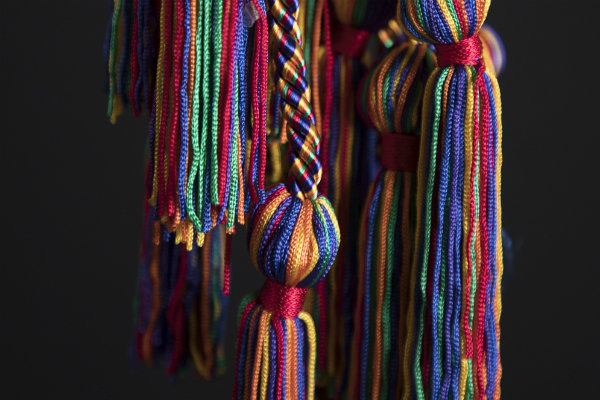 
“My mom is here tonight,” Jacobson told the crowd of 150 that gathered in late April for IC’s Rainbow Reception, an annual celebration of the LGBTQ community and its graduating members. “This is the first time she’s seeing me be public about being LGBTQ. She never could have seen me do this in my hometown, a place that could never accept me.”

Hailing from a town of just 7,000 people in western Pennsylvania, Jacobson moved to the IC campus and immediately sought out The Center for LGBT Education, Outreach, and Services and its director, Luca Maurer. The Rainbow Reception provided Jacobson the opportunity to thank the community of people who provided support through four years of college.

“Coming to IC, I learned how to love myself and be myself,” Jacobson said. “Thank you for teaching me how to love with such veracity and joy. I will do that for the rest of my life.”

The Rainbow Reception, now in its 15th year at IC, is modeled after an event that began at the University of Michigan in 1995. Three graduates participated that first year at UMich; today, thousands of LGBTQ students take part in similar ceremonies at campuses across the nation.

“The idea is to celebrate and honor the achievements and contributions of LGBTQ students and allies,” says Maurer. “We celebrate each student as a whole person and acknowledge academic, professional, and personal accomplishments.”

IC’s inaugural celebration recognized six graduates. As the years passed and more IC students began to feel comfortable publicly identifying as a part of the LGBTQ community, the event outgrew its venue—twice. The 2017 reception honored more than 70 graduates, including five doctorate of physical theraphy candidates—the largest doctoral cohort since the event's inception.

“The Rainbow Reception is one night, but its impact is so much more than that,” explains Maurer. “First-year students attend, and it becomes an inspiration. On bad days, they say, ‘OK, I can do this. I want to make it to my Rainbow Reception. It’s waiting for me.’”

As a part of the formal Rainbow Reception program, Maurer distributes regalia that many choose to wear at Commencement: rainbow honor cords for seniors and rainbow stoles for master’s and doctoral candidates. After an awards presentation that honors contributions to the college’s LGBTQ community, Maurer opens up the microphone for anyone to speak.

The two-plus hour event is emotional for many.

“I can’t even explain how much these cords mean to all of us,” Dakota Collina ’18 told the crowd, as he wiped away tears. “I’m here. I’m queer. And that’s all I have ever wanted to be.”

These days, the event is standing room only, and for Arlana Shikongo ’17, who identifies as queer, attending the first time as a senior was an experience she’ll never forget. “I had done other things on campus, such as ZAP! panel discussions,” she said. “But going to a larger reception felt a bit nerve-wracking. However, as soon as I stepped into the room, I felt a homey, accepting vibe.”

Shikongo says the uneasiness she felt about attending the Rainbow Reception was probably a result of growing up in Namibia, where same-sex relationships are criminalized and only talked about in derogatory terms. “Growing up, I was closeted and pretty much denied my sexuality,” she said. “I chose to attend Ithaca College in large part because it had a reputation as LGBTQ-friendly, and my journey started when I stepped foot on campus.”

And although she found the campus community largely accepting, she admits there were still some challenges she had to face. "If I identify as queer, I can't identify as African, because queerness isn't seen as part of being African," Shikongo said. "Many people on the continent still think of queerness as a 'white people' thing, or as something that was brought from the West and is unnatural."

Overcoming those challenges was made easier thanks to Maurer, whom Shikongo calls not just a mentor, but a friend. “He was the go-to person on this campus,” she said. “I remember one time, I was having a rough day, and I went to the Resource Center and spoke with him for two hours. After that, he’d check on me regularly to see how I was doing.”

Maurer wasn’t the only friendly face Shikongo saw at the reception. David Prunty, the college’s director of auxiliary services, was in attendance.

“I’d worked for David when I was a student, but he didn’t know then that I was out,” she said. “At the reception, I gave a short speech detailing some of the challenges I faced growing up. When I was done, he came up to me, hugged me, and told me my speech was beautiful. That was amazing.”

Her parents both know she identifies as queer, but she says her mother believes it’s a phase, and, while her father is accepting, she still senses his occasional discomfort. Because of this, Shikongo didn’t tell them about the event beforehand.

Collina’s parents and grandmother made the trip to support him, but not everyone is able to celebrate with loved ones. Busy work schedules or travel to Ithaca can pose challenges. But sometimes, Maurer explains, families won’t attend because they haven’t accepted or can’t support their graduate’s sexuality.

Standing by for moments like those are Nan and Rich Tobin of Danville, Pennsylvania, and Kathleen and Barry Ballard of Groton, New York. These “stand-in parents” as Maurer affectionately calls them—were leaders of the local PFLAG chapter (national organization for families and allies of LGBTQ people) during the Rainbow Reception’s first year. Understanding that some graduates didn’t feel support from their own families, the Tobins and Ballards enthusiastically responded to Maurer’s invitation for their involvement. They have attended every Rainbow Reception at IC since.

“Our stand-in parents are here for anyone and everyone,” he says. “They jump up and cheer for every graduate.”

The Ballards and Tobins are there to support students who don’t have parents or grandparents in attendance. They also have served as a resource for families who may feel uncomfortable with their role or have questions about how to best support their children, says Maurer.

“The one thing that has and hasn't changed is how students are accepted at home and in our culture,” says Kathleen Ballard, whose son graduated from IC in 1999. “While many more parents are accepting and attend the Rainbow Reception, we continue to hear stories of students whose parents are not able to accept that their children are gay or lesbian, bi, or trans.”

Reminding students that a support network exists outside of college is one reason that the Ballards are drawn back to the reception every year.

“Every student needs to know that parents can learn to be accepting of who they are,” says Ballard. “The Rainbow Reception is a wonderful way for students to celebrate their four years at IC and to honor those who have helped them through those years. We love hearing their stories, sharing their joy and sometimes their tears. It is a tradition that is unique and hopefully will continue long after we elders are replaced.”

Though the couple moved more than three hours away some years ago, Nancy and Rich Tobin make the journey back to Ithaca every year for the event. They have no formal ties to Ithaca College other than the Rainbow Reception, but they say they cherish the time they spend with students.

“Some years, it was just Luca and us and a few students,” recalls Rich Tobin. “Last year, I remember meeting a young man who couldn’t go home after graduation. He said his parents wanted nothing to do with him. It can feel like a big party in many ways, but if you spend time with these students, you realize what a huge deal it is for them. It’s one moment in time when they truly feel celebrated.”

“I remember being caught off guard at how touching it was to be embraced by one of these parents after receiving my rainbow cords,” says Kasulke. “I’ve never been so happy to be hugged by a stranger.”

Alumni return for the reception, and they, too, serve an important role in supporting LGBTQ graduates.

“It’s important for students to have adults who support them and who approve of them for who they are,” says Anna Lawrence ’12, who traveled from Boston for last spring’s event. “This event celebrates students for all their accomplishments, and it can feel like the whole campus is there. This is a community that is supportive of the individuals within it.”

Alumni also help assure students that their network of support holds, even after the graduation festivities are over. Devon Ritz Anderson ’12 addressed graduates at last spring’s reception, reminding them that they have a critical place in the world.

“This has been a scary time for a lot of us,” Anderson said. “People are telling us that we are asking for too much to demand respect in every space. In whatever you want to do, you deserve to enjoy and thrive in that, with every piece of your identity. “Always remember to take deep breaths, pack snacks and gum, nap as much as possible, and find your people, or that one person you can have deep conversations with. Take care of yourself!”