ITHACA, NY — Ithaca College junior Elizabeth Stoltz has been named a 2012 Newman Civic Fellow, an award that recognizes college students for being leaders who have worked to find solutions to challenges facing their communities. She is among the 162 students nationwide to receive the honor from Campus Compact, a coalition of college and university presidents committed to fulfilling the civic purposes of higher education by improving community life and educating students for civic and social responsibility.

“These students represent the next generation of public problem solvers and civic leaders,” noted Campus Compact board chair James B. Dworkin, chancellor at Purdue University North Central. “They serve as national examples of the role that higher education can — and does — play in building a better world.”

While still in high school, Stoltz founded the organization Food for Thought, which seeks to eradicate malnourishment in the developing world through fundraising, awareness and healthy food. She is a researcher for She’s the First, an organization that helps girls in developing countries become the first in their family to graduate from school, and in 2009 she traveled to Ethiopia to work with young children and HIV/AIDS patients. She also writes for several websites on humanitarian issues.

Among other leadership roles, Stoltz serves as the student representative on the Ithaca College Board of Trustees and is an executive board member of the Student Government Association. An integrated marketing communications major, she is a Park Scholar in the Roy H. Park School of Communications.

“To date, under Elizabeth’s leadership and dedication, Food For Thought has raised $20,000 dollars for children suffering malnutrition in Ethiopia, helped support a girl’s education at Shanti Bhavan School in India, assisted the hungry in Ithaca and supported orphanages in Nicaragua, Peru and Russia,” Rochon said. “In short, Elizabeth’s commitment to service has had both a local and global impact.”

“It’s an incredible honor to have been selected by President Rochon and the Office of Student Engagement and Multicultural Affairs as a nominee for the Newman Civic Fellows award,” said Stoltz. “Ithaca College has provided me with so many opportunities to integrate my interests in communications with social justice, and I look forward to learning from and joining this community of fellows.”

Stoltz will join a network of fellows around the country who together — sharing ideas and tools through online networking — will leverage an even greater capacity for service and change and continue to set examples for their classmates and others.

For more information on the Newman Civic Fellows program and Campus Compact, contact Cara Lovell at clovell@compact.org or (617) 357-1881, ext. 208. 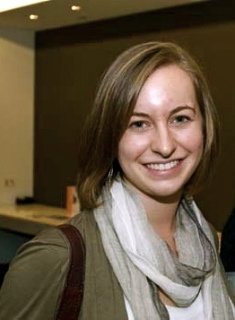