ITHACA, N.Y. - Tucker Healy (Needham, Mass./Needham), who recently completed his career with the Ithaca College baseball team, has been selected on the third day of the Major League Baseball Amateur Draft. Healy was picked by the Oakland Athletics in the 23rd round with the 709th pick. He's the first Bomber drafted since Shane Wolf and Bryan Gardner were taken in the 2008 draft. He graduated last month from the School of Business.

"We were following it online, and we had an inkling, because [the Oakland A's] had called last night and said that they were planning on taking him today," Michael Healy, Tucker's father, told the Needham (Mass.) Patch. "But that happened last year—the Mets called him last year and said the same thing and then never took him. You just never know until you hear it called out."

In his career, Healy recorded a school-record-tying 16 saves with a 9-5 record. In 59 career appearances (fourth all-time at Ithaca), which includes six starts, he struck out 152 batters in 100.2 innings; his career average of 13.59 (151 strikeouts in 99.1 innings) is second on the program's all-time list and among Division III's 20 best marks. 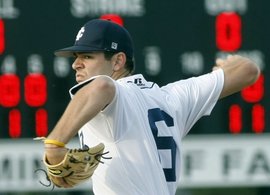