ITHACA, NY—A longtime promoter of democracy and social justice around the globe will discuss power, terror and the constant tension between realpolitik and humanitarian action at Ithaca College on Monday, April 22.

Amii Omara-Otunnu will present “The Challenge of Leadership and Human Rights in the 21st Century” at 7 p.m. in the VIP Lounge of the Athletics & Events Center. His talk is free and open to the public and will be followed by a reception.

Omara-Otunnu serves as the UNESCO Chair in Comparative Human Rights and as executive director of the UConn-ANC Partnership at the University of Connecticut, where he is also a professor of history. The chair was established by UNESCO (United Nations Educational, Scientific and Cultural Organization) in 2001 to promote an integrated system of research education, information and documentation in the field of human rights.

Since his student days in Uganda and as the first secretary-general of Harvard’s African Students’ Association, Omara-Otunnu has been an activist for democratic movements. He engages this cause as a scholar and an advocate, by shaping policy and building structures and alliances through which to effect positive change in society.

Omara-Otunnu has been invited by the United Nations Security Council to discuss approaches to international security through regional organizations. In 1984 he was part of a UNESCO delegation to Beijing for a conference aimed at identifying ways to eliminate racism and its impact worldwide. In 1995 he was one of five international scholars selected to work on a project with the International Peace Institute in Oslo on the issue of armed conflict and democratization in Africa.

Among other publications, Omara-Otunnu is the author of “Politics and the Military in Uganda, 1895-1985” and editor of “Human Rights: Voices of the World’s Young Activists.” He holds memberships in a number of organizations, including the African Studies Association, Oxford Law Society and Desmond Tutu Educational Trust.

His visit is sponsored by the Ithaca College Honors Program. 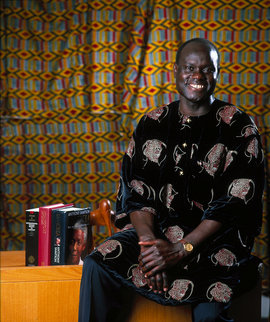