Six impressive Ithaca College graduates were honored at the annual Alumni Awards last week for their achievements and contributions to the college, including a doctor who fought Ebola in Liberia, a NASA scientist and the founder of a network dedicated to improving diversity and inclusion on campus.

“It was great to have so many impressive alumni together and celebrate their achievements,” said Ami Maki, president of the alumni association. “Whether it’s their professional accomplishments or their dedication to giving back to the college, they have demonstrated the true value of an IC education.”

The ceremony was held on Oct. 12 at the Lotte New York Palace in New York City. 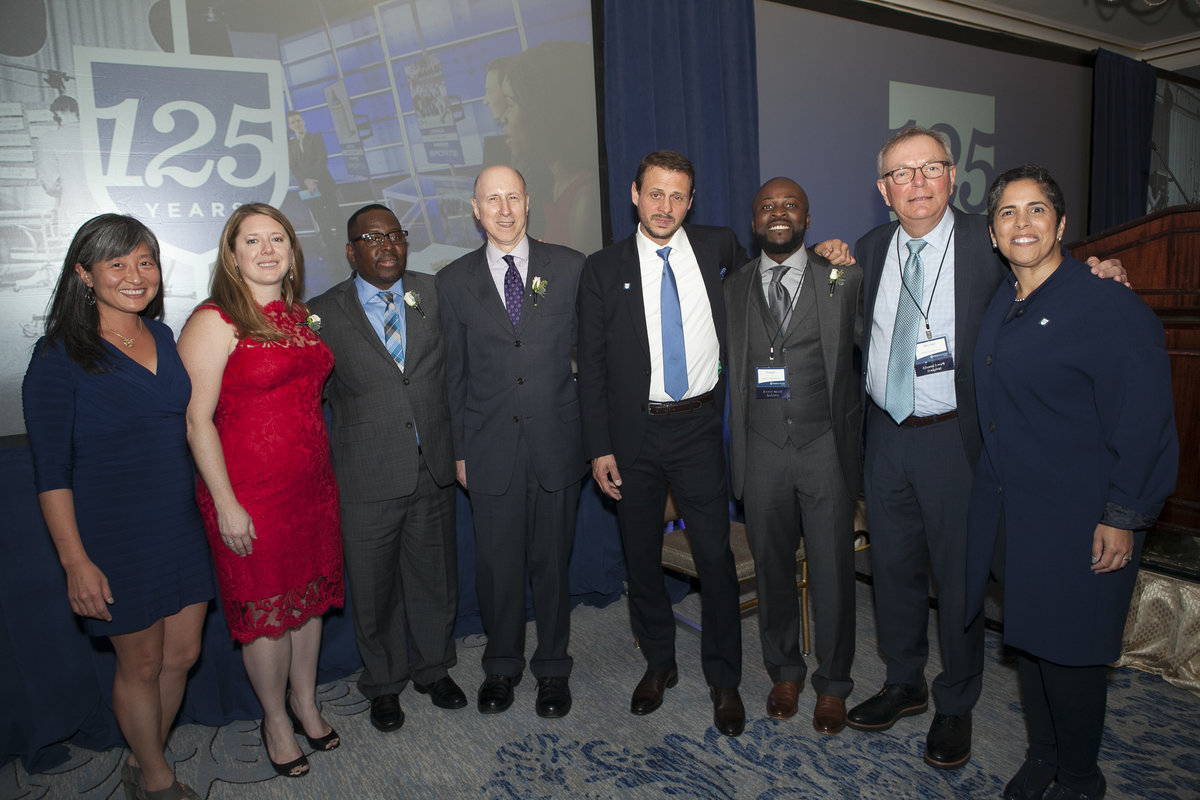 
Michelle L. Niescierenko ’02, M.D., M.P.H. received the Humanitarian Award, given to alumni who have made a transformative contribution to the world and helped make it a better place to live. She is a pediatric emergency medicine physician and director of the Global Health Program at Boston Children’s Hospital, which works to improve children’s health in over 30 countries around the world. She is also an instructor of emergency medicine and pediatrics at Harvard Medical School.

A biology major at IC, Niescierenko has experience in pediatric care and program development in China, Bolivia, Lesotho, Guatemala, Liberia, Indonesia, Uganda, Saudi Arabia, Turkey and Syria. She provided pediatric humanitarian aid in post-conflict Liberia, and during the 2014-2015 Ebola outbreak she led the $3 million public health response in the country, utilizing the rapid deployment of training done by local healthcare workers.

Receiving the Lifetime Achievement Award was Michael A. Meador ’78. The award recognizes alumni who have achieved exceptional success in their profession and have contributed significantly to the advancement of civic, philanthropic or service organizations. Meador joined the NASA Glenn Research Center in 1983, where he has been involved in planning and leading research in advanced materials. He has served as the chief of the NASA Glenn Polymers Branch and the chair of NASA’s Nanotechnology Roadmap Team.

He served in the White House Office of Science and Technology Policy from 2014-2016 as the director of the National Nanotechnology Coordination Office, developing new approaches to fostering the commercialization of nanotechnology-based products and ways to better inform the public about the benefits of nanotechnology.

Meador studied chemistry at IC, and has maintained a connection to the college by hosting students as summer interns and returning to campus as a seminar speaker. 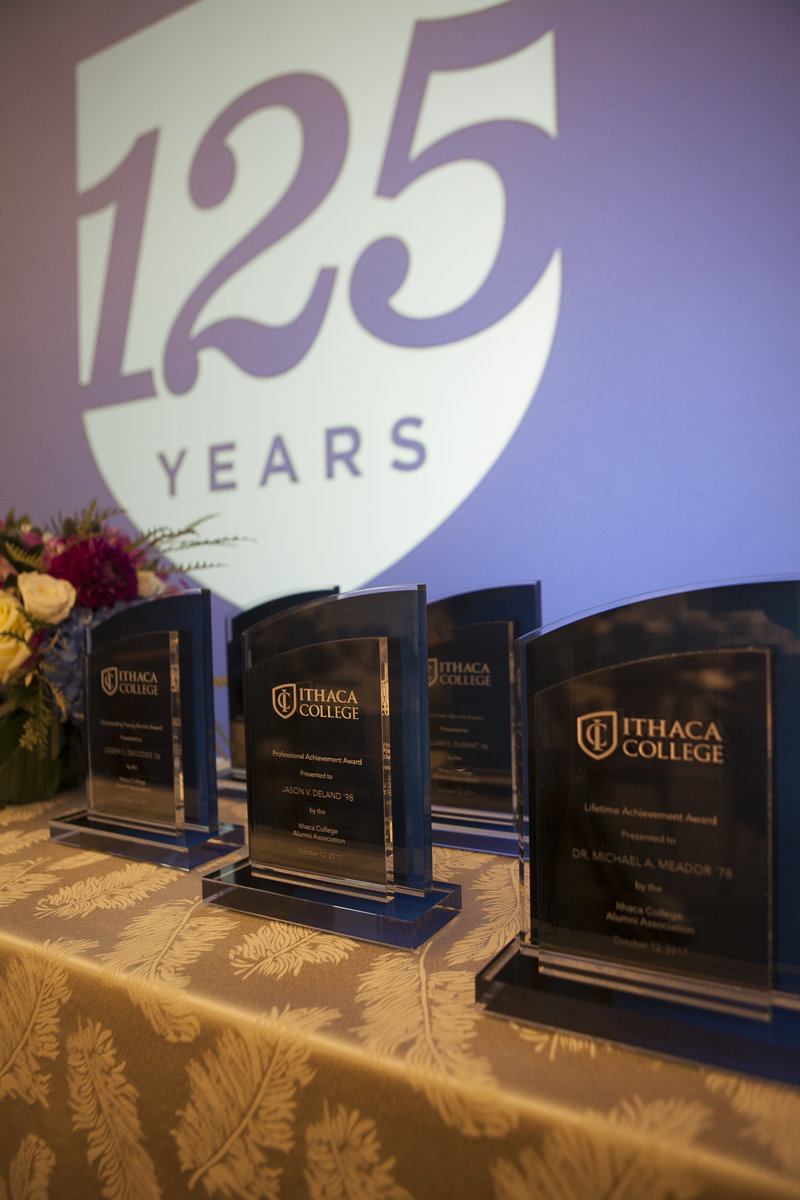 Alumni awards are given to Ithaca College alumni for their achievements and contributions to the college. (Photo by Francine Daveta)


Jason V. DeLand ’98 received the Professional Achievement Award, which recognizes graduates who have achieved distinction in their professions. At just 27 years old, DeLand co-founded Anomaly, a now-global advertising agency that won Ad Age’s Agency of the Year Award in 2017. Anomaly has six offices worldwide, and its client list includes heavy hitters like Budweiser, Panera, Major League Baseball and Dick’s Sporting Goods. DeLand was recognized by Adweek in 2012 as one of its “20 Most Influential People Under 40.”

In addition to his role as joint global CEO at Anomaly, DeLand regularly appears as a press commentator and marketing expert on Charlie Rose, Bloomberg News and MSNBC. He is a founding member and sits on the board Hmbldt, an Anomaly-backed venture that has been praised for its innovation in the field of medicinal marijuana. He is also a board member of DREAM, a youth development organization in New York City.

DeLand studied communications and political science at IC, and played for four years on the baseball team.

Taking home the Outstanding Young Alumni Award was Joseph C. Ewoodzie ’06. The award is given to recent graduates who are excelling in their professions and are emerging leaders in their field. Ewoodzie is currently an assistant professor of sociology and Africana studies at Davidson College, where he examines how marginalized populations in urban locales make sense of inequalities in their everyday lives. He recently published his first book, “Break Beats in the Bronx: Rediscovering Hip-Hop's Early Years.”

Ewoodzie emigrated to the U.S. from Ghana in 1997. As an MLK scholar and sociology major at IC, he studied in countries including Brazil, Costa Rica, the Dominican Republic and Jamaica.

Ralph A. Siciliano ’72 won the Edgar “Dusty” Bredbenner Jr. '50 Distinguished Alumni Award. The highest award given by the alumni association, it is presented to graduates who have demonstrated outstanding loyalty and service to Ithaca College. Siciliano is a partner at Tannenbaum, Helpern, Syracuse & Hirschtritt, LLP, where he advises clients in the financial services industry. He began his legal career as a prosecutor with the U.S. Securities and Exchange Commission and held several senior posts in its New York office.

Siciliano served as a member of the IC Board of Trustees for 16 years, and served on the alumni association board for 18 years, including one term as president.

A politics major at IC, Siciliano was active in student politics, serving as president of the student government. His experience at the college inspired him to volunteer with the Little Sisters of the Assumption Family Health Service in New York City, where he served as board president for 16 years.

Bill Durant ’86 received the Volunteer Service Award, acknowledging those who have significantly contributed to the college in a volunteer capacity and have made outstanding efforts on behalf of a particular department, program, or school. Durant is the founder and president of the ICUnity Multicultural Network, which helps students and alumni to professionally connect and become engaged in IC's diversity and inclusion-related initiatives. Three hundred people have already signed up to attend the ICUnity Intercultural Social during the college’s Weekend on South Hill 125th anniversary celebration.

“My contributions would not have been possible without the support of many of the alumni, college administrators, staff and trustees who attended the award ceremony, as well as others whom I know were there in spirit,” he said.

An economics-management major at IC, Durant has held sales and marketing management positions in the computer software and publishing industries.

Durant pointed to his own experience at IC as the reason he chose to remain engaged with the college as a volunteer. He arrived on the IC campus in 1986 having never even visited and unsure that he’d fit in, but says in the end the college gave him a great education, financial support and lifetime friends and professional contacts.

“I give back because I want to help students get the most value from their IC investment, with the hope that they will in turn give back after they graduate,” he said.

Video profiles of the award winners can be found on the IC YouTube channel. 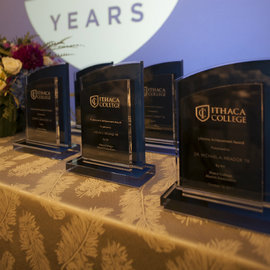