Ithaca College Board of Trustees Sets Tuition for 2018-19

Ithaca College will continue its recent trend of lowering the rate of increase in the costs of attending. The Ithaca College Board of Trustees has set tuition for the 2018–19 academic year at $43,978. The 2.55 percent increase represents the lowest rise in over half a century.

For students who live on campus and pay standard room and board, the total cost will be $59,540.

The Board of Trustees also approved a financial aid budget for next year of $126 million — the highest amount ever — underscoring the college’s commitment to remaining affordable.

“Access and affordability are among the greatest challenges facing higher education today,” said Ithaca College President Shirley M. Collado. “As we continue our efforts to control the cost of obtaining an Ithaca College education, we will also continue to ensure that we are providing our students with the best possible learning experience.”

For incoming students from New York State, the college recently announced the establishment of the New York State Tuition Award. The program provides scholarships of up to $6,000 per year for up to four years of study for qualifying New York residents.

Unlike the state’s Excelsior Scholarship for SUNY schools and Enhanced Tuition Assistance program for private institutions, the Ithaca College award does not require residency in New York following graduation and will never be turned into a loan. Additionally, if a student who receives the Ithaca College scholarship also receives federal or state grants, that aid amount will not be deducted from the college’s award, which is especially beneficial for lower-income families. 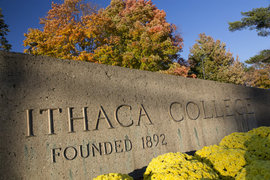