ITHACA, NY – Ithaca College Theatre will conclude the fall semester with David Ives’ “Mere Mortals.” Performances will run in the Clark Theatre in Dillingham Center on Dec. 3, 5, 6 and 7 at 8 p.m., with 2 p.m. matinee performances on Dec. 7 and 8.

Ives, a Yale School of Drama graduate and former Guggenheim Fellow, has had works both on and off-Broadway. Like Ives’ previous plays “All in the Timing and Venus in Fur,” the plot’s main mover is language. When director Greg Bostwick was asked why he chose this work, he stated, “There is something for everyone in ‘Mere Mortals’ as the characters pursue their dreams of an existence that transcends the banality of everyday living.” Whether watching mayflies engage on a first date or three constructions workers reveal their hidden (famous) identities, “Mere Mortals” takes the audience into a world that is larger than their own.

A nationally recognized professional theatre-training program, the Department of Theatre Arts attracts students from across the globe. Throughout the school year, undergraduate students present all aspects of theatre in a professional model. Visit www.ithaca.edu/ theatre/mainstage/ for further information.

Dillingham Center accommodates all patrons. Individuals with special needs are asked to contact (607) 274-3224 to request accommodations as soon as possible. 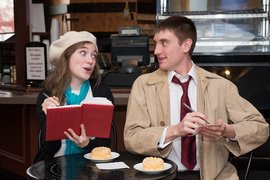