What do you get when you bring 20 people together who have Ithaca College connections and more than 350 cumulative years on campus? If you guessed a boatload of colorful stories, you’d be right.

In advance of the college’s 125th birthday, we invited a group of local alumni, retired faculty and staff, and friends to campus to chat about their experiences and help us understand what life was like at IC in the not-so distant past. 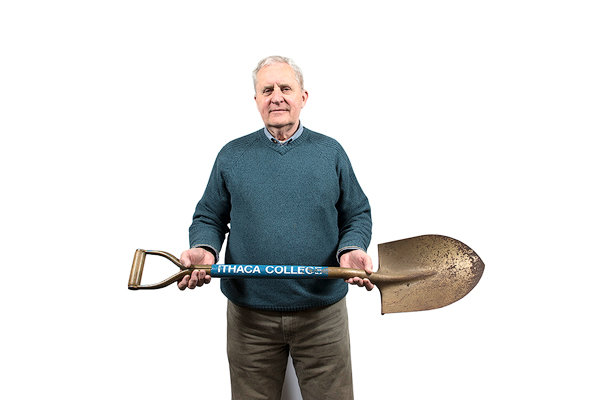 
Carl Sgrecci ’69, retired vice president of finance and administration who had worked at the college for over 40 years, facilitated the wide-ranging and spirited discussion. The attendees — graduates spanning the classes of 1950 to 1983 and retirees who had worked at IC up until a few years ago — reminisced over lunch about traveling hats and dormitory drapes, and painted a picture of lives lived in an evolving world that’s held together by a common thread: Ithaca College.

David Stewart ’67 attended the luncheon ready with some numbers.

“Anyone know what the tuition was in 1963?” Stewart asked his fellow alumni. “Tuition per semester, $650. Room, $175. Board, $250. On top of that there were some fees. The $50 general fee, linen service, room fee, lab fee, studio fee, and insurance that brought the total to $1,092.50 for a semester. Things have changed a little over the years.” Stewart also had an article from the same year with this headline: “Ithaca College to Spend $5.1 Million for New Buildings.”

“Three buildings for $5.1 million! Again, the times have changed.”

Tom Salm worked at IC from 1976 to 2002, serving as vice president for business and administrative affairs during a time of enormous growth. Salm brought a shovel to the luncheon that was used for multiple groundbreakings on IC’s South Hill campus. He recalled, “I got tagged with being responsible for doing a fair amount of construction during the time I was here as project manager on 20 buildings.”

He said Boothroyd Hall was built in only 10 weeks. He also recollected a May 1965 Time magazine article, titled “How to Buy a Campus,” that called Ithaca College the most highly leveraged institution in the country — though now the college maintains an A2 stable rating from Moody’s Investors Service, meaning IC is doing just fine financially.

These days on Ithaca College’s campus, it’s perfectly acceptable for female and male students to live together on the same hall — or even in the same room. And biceps, legs, midriffs, and many other body parts that would’ve been immodest to reveal years ago are out in full force. So it’s difficult to imagine that something as simple as being seen in a nightgown would prompt newspaper coverage and the intervention of the college president’s wife.

It was the late ’60s and the Terraces had just been built, Sgrecci recalls. But there was a problem with the brand-new buildings: the women’s windowed lounge area faced the men’s. “There were no drapes on the windows, so the coeds could not go out in their nightgowns and relax comfortably because every time they did, men would come out and taunt them through the windows,” Sgrecci says. The women wrote a letter to the editor of The Ithacan to complain. “So a couple of weeks went on, and there was a letter to the editor from the same women thanking Mrs. Dillingham for her role in seeing that there were drapes installed in their residence hall. I thought that was significant because it pointed out Mrs. Dillingham, as the college’s ‘first lady’ at the time, reading the student newspaper and seeing that student concerns were being addressed.”

Being seen in a nightgown was a no-no, but dresses were expected when women — played sports?

“We had to wear these uniforms all the time for our gym classes. I wish I still had one, but I don’t,” says Shannon Bielaska ’72, MS ’74. “They were these blue jumpers with a white Peter Pan collar shirt. We had to wear those for our classes, and they had these black bloomers that you wore underneath them. We actually played basketball in those jumpers.” And you had to make sure your uniform was neatly pressed before class—or else. If you came to class with a wrinkled jumper, Bielaska says, you were sent back to your room and marked absent. “We ironed those stupid jumpers,” she says. “They had to be perfect.”

Another thing that got alumni talking was the curriculum called Triplum, which required students to take three years of history, philosophy, and literature in sequence, from classical to modern times.

“I was a language major initially, taking Spanish and French in my first year along with biology and a full Triplum load,” Matt Wall ’67 recalls. “In the early 1960s the Triplum became Ithaca College’s trademark; everybody had to take it, even majors in professional fields. Somewhere in there, I discovered myself and became a decent student. I just caught on fire, and it all had to do with not only what I was studying but who I was studying with: the likes of the English department, which was one of the best humanities departments anywhere. I developed a real sense of confidence and self-worth. I had always loved to read, but I’ve never put down a book since, and so that’s what I owe Ithaca College.”

When students weren’t poring over the classics, there was plenty of time for the hands-on learning and student enterprise that Ithaca College was known for then—and now. One example of that is the Scampers shows, put on by students of all majors. “In 1962, we wrote a real two act musical show called ‘The Village Heir,’ about Washington Square Park in New York City. It was very timely in 1963,” explains Steve Brown ’64, MS ’64, about the student-authored and composed production centering on an inherited building turned jazz club. “And then the next year, in ’63, we did another show called ‘Run Twice as Fast,’ based on the book ‘Animal Farm’ by George Orwell. These were complete books and music written, performed, supervised, and recorded entirely by students.”