In a banner year for journalism by non-conglomerate news outlets, the Park Center for Independent Media (PCIM) at Ithaca College has announced the winners of the ninth annual Izzy Award. The award will be shared by Mother Jones senior reporter Shane Bauer and Nation Institute Investigative Fund reporter Seth Freed Wessler who, working independently, revealed major abuses at for-profit U.S. prisons; and by The Nation senior contributing writer Ari Berman, who exposed efforts to suppress voting.

A “special documentary honor” will be conferred on “America Divided,” a documentary series that powerfully illuminates structural inequality in the United States. 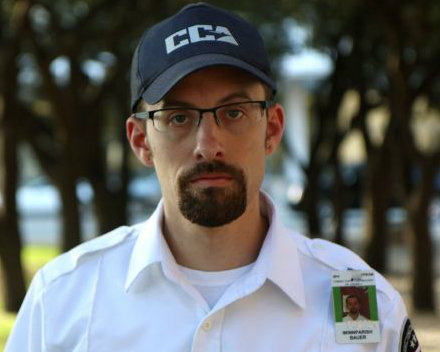 
The Izzy Award, presented for outstanding achievement in independent media, is named after the late I.F. “Izzy” Stone, the dissident journalist who launched I.F. Stone’s Weekly in 1953 and challenged McCarthyism, racial injustice, the Vietnam War and government deceit. The award ceremony will be held in Ithaca in April; details to be announced.

Shane Bauer produced a blockbuster investigative piece for Mother Jones, “My Four Months as a Private Prison Guard.” After being hired for $9 an hour as a Louisiana prison guard by the country’s second-largest private prison company — Corrections Corporation of America (CCA), recently rebranded as CoreCivic — Bauer witnessed violence, lockdowns and his own disturbing transformation, and told it all in a gripping 35,000-word story, supplemented by undercover video footage. The widely discussed story shook up CCA and helped prod the Obama administration to distance itself from private prisons. Later in the year, Bauer produced another absorbing insider’s report, “Undercover With a Border Militia,” on his experience with a well-armed, unofficial U.S. militia group patrolling the Mexico border.

“Shane Bauer’s bravery in conducting vital undercover investigations is matched by the vividness of his reporting and storytelling,” said the Izzy Award judges.


Through exhaustive documentary research, a Freedom of Information lawsuit, dozens of interviews with current and former inmates, federal officials and prison officers, and expert review by independent physicians, Seth Freed Wessler produced a series of reports revealing medical neglect and failing government oversight in privately run federal prisons that led to dozens of avoidable deaths. Wessler’s reporting on these prisons, separate and unequal facilities designated for non-citizens, was published by The Nation and Reveal, in collaboration with The Investigative Fund. Following publication, one of the most troubled prisons was closed and the U.S. Justice Department ordered the Bureau of Prisons to end its use of private prisons. Wessler is a reporting fellow with The Investigative Fund at The Nation Institute.

“It’s breathtaking to see a dogged journalist in the person of Seth Wessler uncovering so much and proving so clearly that lives were needlessly lost as a result of privatization, greed and official neglect,” commented the Izzy judges.

The judges concluded: “With the Trump administration signaling its readiness to ramp up the use of private prisons, the investigative journalism of Bauer and Wessler is more relevant than ever.”


In dozens of reports for The Nation and TheNation.com, Ari Berman was pathbreaking in exposing the actions of various states to depress voter turnout and restrict voting access, especially targeting minorities and youths. Amid the first presidential election in 50 years without the full protection of the Voting Rights Act, Berman crisscrossed the country to uncover the facts and motives behind new voting restrictions in more than a dozen states. In “The GOP’s War on Voting Is Working” (contrasting Wisconsin and Minnesota) and “Texas’s Voter-Registration Laws Are Straight Out of the Jim Crow Playbook,” he wrote of a “two-tiered democracy.” Berman, a Nation Institute reporting fellow, was called before Congress to present his findings.

“Through the sheer persistence of his digging and writing, Ari Berman illuminated the problem of systematic voter suppression,” said the Izzy Award judges. “Unfortunately, many mainstream outlets ignored or downplayed the national scandal he documented, a scandal that threatens to worsen in the future.”

With the 2016 election approaching, three independent documentary filmmakers – Solly Granatstein, Lucian Read and Richard Rowley – gathered a team of producers to create "America Divided," a series examining structural inequality that divides our country. Using well-known, socially involved actors and artists as correspondents, but relying heavily on experts and social justice advocates, the series explores issues such as worker exploitation, mass incarceration, environmental racism, housing discrimination and voter suppression. The series premiered on the EPIX channel and is now being seen in community gatherings across the country.

“The Izzy Award doesn’t usually consider documentary work,” said Jeff Cohen, PCIM Director and Izzy judge. “But since ‘America Divided’ was so engaging on the biggest issues our society and journalists must address, we felt compelled to recognize it with a ‘special documentary honor.’”

Joining Cohen as the Izzy Award judges for all nine years have been Linda Jue, executive director and editor of the San Francisco-based G.W. Williams Center for Independent Journalism, and University of Illinois communications professor and author Robert W. McChesney.

Based in the Roy H. Park School of Communications at Ithaca College, the Park Center for Independent Media was launched in 2008 as a national center for the study of media outlets that create and distribute content outside traditional corporate systems. For more information, visit www.ithaca.edu/indy/izzy or contact Jeff Cohen at jcohen@ithaca.edu.