Ithaca College’s newly announced provost and senior vice president of academic affairs, La Jerne Terry Cornish, visited campus on May 1-2 to meet with faculty, students and staff. Bringing with her a sense of energy and optimism, Cornish spoke hopefully of the college’s future and emphasized her commitment to collaboration, shared governance and advocacy for faculty.


“I would not be packing up my bags and coming here if I did not believe in the beauty of Ithaca College,” Cornish told a room of faculty members during an introductory meeting on May 1. “You’ve done fantastic work to date, but there is more to be done. If it’s going to be done, it will take all of us to make it happen.”

In addition to an introductory event with faculty, Cornish attended a meeting of the Faculty Council, met with deans and associate and assistant deans of the college’s five schools, and held open sessions with students and staff. An informal meet-and-greet for faculty was also held.

Cornish described her career path, beginning in the Baltimore City Public Schools before being recruited by her alma mater, Goucher College, which sponsored her doctoral studies so that she could join its faculty. As a faculty member, she quickly rose through the ranks to become department chair and faculty chair before becoming associate provost for undergraduate studies.

“I have served often when others said no but I believed in the work, because it is important work,” Cornish said. “I wanted to be the change that I sought, and so how could I do anything but say yes?”

“La Jerne is an experienced leader in higher education, a master in shared governance, a talented administrator who values and promotes cross-sector and cross-disciplinary work,” said Collado. “It’s the core of who she is and the work that she’s done. At her core, she’s a deep advocate for faculty, for student success and full participation throughout all levels and all sectors of the academy.”

Members of the provost search committee touted Cornish’s credentials, emphasizing her ability to be an effective administrator while also leading and advocating for faculty. Committee member Chris McNamara, clinical associate professor in the Department of Physical Therapy, pointed to a study abroad program Cornish created at Goucher College as evidence of her collaborative style of leadership. The Township and Rural Education in South Africa Intensive Course Abroad is an immersive six-week program that introduces students to primary and secondary schools in Grahamstown, South Africa.

“She listened, gathered information, built consensus, and in consultation and collaboration with faculty and students, worked to develop an experience that is both educational and transformative for everyone involved,” said McNamara.

Cornish, who has lived her entire life in Maryland, reiterated her commitment to Ithaca College by joking about Ithaca’s cooler climes. “I love turtlenecks,” she quipped. “They will be required.” 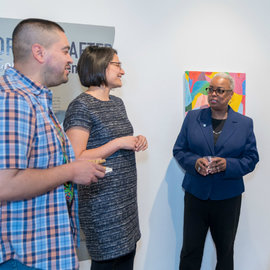