ITHACA, NY—Campus Compact has named Ithaca College junior Allison Currier a 2013 Newman Civic Fellow for her demonstrated commitment to community service and civic engagement. An environmental studies major, Currier is one of 181 college and university students to receive the honor.

Campus Compact is a coalition of college and university presidents committed to fulfilling the civic purposes of higher education by improving community life and educating students for civic and social responsibility.

“These students represent the next generation of public problem solvers and civic leaders,” said Campus Compact president Maureen Curley. “They serve as national examples of the role that higher education can — and does — play in building stronger communities.”

In nominating Currier for the award, Ithaca College president Tom Rochon called her the embodiment of a Newman Civic Fellow, having enriched the campus and the lives of many others through her commitment to civic engagement.

“Through her dedicated efforts in environmental awareness and sustainability, Allison was at the forefront of creating the college’s first permaculture garden located in the heart of our campus,” wrote Rochon. “Allison eagerly embraces leadership roles in all of her commitments, serving as president of the Environmental Society and as a member of the executive committee of the Environmental Leadership Action Network (ELAN), which has worked to move the college towards using 100% recycled paper and has recently engaged in an effort to encourage the college to divest its endowment from companies involved in producing fossil fuels.”

Currier has participated in a number of programs dedicated to social justice at the local, national and international levels, including the Power Shift youth conference and Worldwide Organization of Organic Farmers.

“As a recipient of the Newman Civic Fellow award, I will continue to hold myself, Ithaca College and the greater Ithaca community accountable for creating a world worth graduating into,” said Currier. “Divesting from the fossil fuel industry is the most important action we can take as an institution today, and I am grateful for the recognition in working towards this goal. Winning campaigns need broad support, so I thank President Rochon for his nomination. Together, we will not stop until Ithaca College truly is a sustainable campus, including in our investments. As a student activist, I will continue to take what I learn inside the classroom to create positive change outside.” 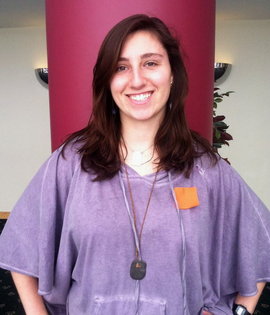