ITHACA, NY — Beth Ellen Clark, associate professor and chair of the physics department at Ithaca College, has received a $2.7 million grant from NASA to support her participation in the first U.S. mission to bring samples of an asteroid back to the Earth for study and analysis. Named OSIRIS-REx (Origins Spectral Interpretation Resource Identification Security-Regolith Explorer), the mission is scheduled to embark on a 3.5-billion-mile roundtrip in 2016 to a primitive carbonaceous organic-rich asteroid called RQ36 — short for “(101955) 1999 RQ36.” While orbiting the asteroid, the spacecraft will execute a series of touch-and-go maneuvers at selected sample sites before returning to Earth by 2023. Clark’s grant will fund her research efforts until 2025.

“Our target asteroid contains a record of the conditions before the solar system was formed, so you can think of the asteroid as a time capsule,” Clark said. “Studying the samples will improve our understanding of how the planets were formed and provide insights into the sources of prebiotic organic compounds necessary for the origin of life. This mission will be the first in the history of space exploration to return a pristine sample of a carbonaceous asteroid.”

In addition, because RQ36 crosses the Earth’s orbit every September and has an outside chance (1 in 1,800) of colliding with the Earth in the year 2182, OSIRIS-REx will give scientists data that can help them refine the asteroid’s orbit and devise strategies to mitigate possible impacts between Earth, RQ36 and other celestial bodies.

During the time leading up to the 2016 launch, Clark will be responsible for integrating the observations of five different science teams to answer scientific questions that will help the mission project select sampling sites. After the spacecraft returns with its samples, Clark and her students will join colleagues to analyze the samples and test theories about the asteroid-meteorite connection and early formation of the solar system.

In all, OSIRIS-REx will marshal the expertise of scientists from 14 colleges and universities as well as the Goddard Space Flight Center, Lockheed Martin Space Systems Company, the Johnson Space Center and other organizations. Michael Drake, director of the Lunar and Planetary Laboratory at the University of Arizona, is the principal investigator; and Dante Lauretta, professor of planetary science, is the deputy principal investigator. The project will cost an estimated $800 million dollars, excluding the launch vehicle.

“Like the Moon rocks from the Apollo missions, samples of RQ36 will keep on giving,” said Clark. “Decades after this mission is completed, we’ll be using equipment we haven’t yet dreamed of to test new theories of solar system origin by examining rocks from RQ36.”

A longtime investigator of meteorites and asteroids, Clark has received numerous grants from NASA to study the mineralogical compositions of these celestial objects. Her articles, coauthored frequently with other asteroid scientists, have appeared in the “Journal of Geophysical Research,” “Nature,” “Science” and “Meteoritics and Planetary Science.”

OSIRIS-Rex is the third mission in NASA’s New Frontiers Program. The first was launched in 2006 and will fly by the Pluto Charon system in 2014. The other launched this year and will orbit Jupiter to conduct the first studies of the giant planet’s atmosphere and interior.

More information on OSIRIS-REx, as well as videos illustrating the mission, are available at http://www.nasa.gov/topics/solarsystem/features/osiris-rex.html
and https://www.youtube.com/watch?v=e6XbYLGWmOs. 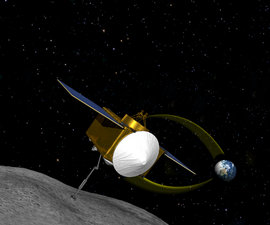