New York Times correspondent Adam B. Ellick — whose reporting first brought Pakistani schoolgirl Malala Yousafzai to the attention of the world — has accepted an invitation to deliver the main address at Ithaca College’s 2016 Commencement ceremony, scheduled for May 22. Ellick is a 1999 journalism graduate of the college’s Roy H. Park School of Communications.

Carrying his backpack and a small camera, Ellick has visited more than 70 countries as a senior video correspondent for The Times. His 2009 documentary on Malala, reported over the course of six months, told her story of bravely defying the Taliban by advocating for the education of girls. Malala was shot and seriously wounded by a gunman in 2012, and in 2014 she became the youngest person to be awarded the Nobel Peace Prize.

Ellick’s stories tend to document human rights abuses and to give a voice to the voiceless. In 2014, he traveled to Myanmar to produce a documentary about the nearly 1 million Muslims confined in camps without healthcare. He coproduced the most-watched video on nytimes.com in 2014, about the lone survivor of an ISIS massacre. He has also covered such stories as the 2004 Asian tsunami, Hugo Chavez’s violent land reforms in Venezuela, Russia’s anti-American youth groups and the Arab Spring protests in Egypt and Bahrain.

“Adam exemplifies the college’s mission, which encourages our students to achieve excellence in their chosen fields while sharing the responsibilities of citizenship and service in the global community,” said Ithaca College President Tom Rochon.

“We are thrilled to have Adam Ellick deliver this year’s Commencement address,” said Marlowe Padilla, president of the Senior Class. “We believe that he can not only challenge us to become advocates for social change, but also inspire us to think critically of the world we live in. I am certain that he will be able to connect what is happening globally today to the careers and lives we seek after Ithaca College.”

Since this past July, Ellick has served as a deputy editor at The Times, working on a small leadership team overseeing 50 video staffers and rethinking the strategic vision for the newspaper’s video coverage. In 2014, he was part of a committee at The Times that authored the Innovation Report, which outlined digital disruption facing news organizations and was called by Harvard’s Nieman Journalism Lab, “one of the key documents of this media age.”

Ellick’s coverage of Pakistan was awarded the 2010 Daniel Pearl Award for outstanding reporting about South Asia. He has won consecutive Overseas Press Club awards and has been nominated three times for the Livingston Award, which honors journalists under the age of 35. In 2013, he won the Justice Award from the Cinema for Peace Foundation. Earlier this year, the Ithaca College Alumni Association presented him with the Humanitarian Alumni Award.

Before joining The Times, Ellick was a Fulbright Scholar in Indonesia and spent four years reporting across Eastern Europe and Russia. He started his career at the Indianapolis Star as a Pulliam Fellow. He has served as a term member at the Council on Foreign Relations. In addition to his Ithaca College degree, he holds a master’s degree from Harvard’s Kennedy School of Government. 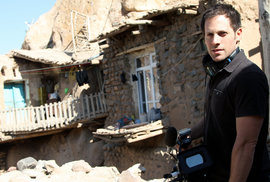