ITHACA, NY—The film version of “Lesbian Fairytale Musical” — an original full-length musical written and performed by Ithaca College students — will close out this year’s Out of the Closet and Onto the Screen series on Thursday, April 11. The 7 p.m. showing in Textor 103 is free and open to the public.

In this fairytale, a princess is sent as a peace offering to another country and is set up to marry a prince. Rather than falling in love with her betrothed, she takes notice of the prince’s sister instead. Come to the screening to find out which couple ends up together living “happily ever after.”

The Out of the Closet and Onto the Screen series is sponsored by the Ithaca College Center for Lesbian, Gay, Bisexual and Transgender (LGBT) Education, Outreach, and Services.

The story of “Lesbian Fairytale Musical” was written by television-radio scriptwriting major Sarah Kasulke ’12, with the music and lyrics by music composition major Will Shishmanian ’13. Drama major Sara Stevens ’13 directed the original stage version, while cinema and photography major Amy Obarski ’13 created the film, which showcases the talents of more than 30 additional IC students who served as the cast and crew.

Shishmanian came up with the idea for the musical and approached Kasulke to write the script. Both are part of the LGBT community on campus.

“We wanted to make something for everyone, not just people like us, but we wanted it to be about people like us,” according to Kasulke. “This wasn’t, ‘Hey, let’s make a gay thing for gay people.’ It was, ‘Hey, let’s make a gay thing for everyone.’ Just one step closer to more common and accurate media portrayals of LGBT characters as just people, rather than stereotypes or token characters.”

The musical was first staged on campus and at the Community School of Music and Arts last year, to a positive reception.

“It was really awesome seeing so many people come out and cheer on this little lesbian couple’s love story,” said Kasulke. “You don’t get to see that every day.”

“This year for the very first time, the film series opened, and will close, with films created entirely by IC students, featuring IC students,” noted Lis Maurer, program director of the LGBT Center. “Our students are amazingly talented, and it’s truly wonderful to be able to highlight their work as part of the series.” 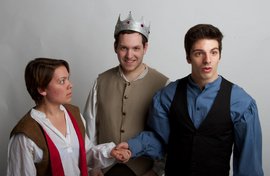