ITHACA, NY — A new program being created by the Roy H. Park School of Communications at Ithaca College takes the idea of the traditional Hollywood movie studio and gives it a modern twist, providing students with unparalleled opportunities to produce and distribute projects across multiple media platforms. The Transmedia Studio will be a cocurricular organization, mirroring the structure of the school’s award-winning student television, radio and newspaper operations.

An executive staff made up of Park School students will run the studio, listening to “pitches” from fellow students and deciding which project proposals to fund. The projects can range from narrative films to online webisodes, and draw upon the talents of students across the entire campus, from writing, producing, directing and acting to editing, budgeting, scoring, set and costume design and marketing.

“I am continually impressed by our students’ entrepreneurial spirit and the high quality of their productions,” said Diane Gayeski, dean of the Park School. “It is gratifying to be able to recognize their talent and energy and to provide them with this novel environment to produce, manage and distribute their own projects in a center of innovation.”

With its own budget and production space, the studio will be open year-round, thus supporting the creation of much more ambitious projects than could be accomplished within existing courses. It will be overseen by Carol Jennings, director of the Park Media Lab. She holds an M.A. in cinema studies and an M.F.A. in film and television production from New York University and has produced and directed a number of award-winning film, video and online projects.

“The studio is an exciting opportunity for students to practice being content creators and organizational leaders in the kind of dynamic, collaborative context they’ll enter in the professional world when they graduate,” said Jennings.

Agreeing with that assessment is Dan Heffner, an executive producer of the “Saw” movie franchise. A 1978 cinema studies graduate, his Hollywood work experience over the past three decades has included stints at Columbia Pictures, Walt Disney Studios and Buena Vista Pictures Distribution.

“The Transmedia Studio will be an exceptional setting in which students can learn how to take a project from conception to distribution in a system that mirrors what students will find when they enter the ‘real’ world of moviemaking,” noted Heffner. “This opportunity is priceless!”

Jennings will work this fall with a small team of students, alumni and professional consultants to create a handbook and organizational structure, with the studio expected to be operational starting in the spring 2013 semester.

Junior television-radio major Mike Belmonte is among those excited by the prospects. “The new studio will provide a great pathway for students to learn about the industry and produce high-caliber work in a professional environment,” said Belmonte. “This is an amazing opportunity that was not previously possible at Ithaca College or anywhere else that I know of.”

For more information, contact Melissa Gattine, marketing communications manager in the Park School, at (607) 274-1023 or mgattine@ithaca.edu. 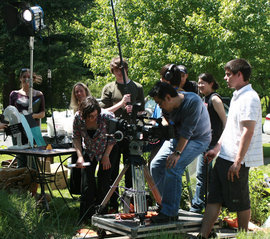