Frances Cicero LaPlaca ’60 infuses her classroom and studio with grace and love.   by Anne Ryan

She was a second grader in Albany when she fell in love with the piano, but Fran Cicero’s Italian immigrant parents could not afford to buy her one. Three years later they presented her with a second-hand piano for which they had saved up $90. “I was simply delighted,” recalls Fran. “That piano is still in my home and will always remain special to me.”

For Fran, teaching music is a life’s calling — and her dedication has led to some of the most prestigious honors in the profession. But it wasn’t always easy. She had to work as an operator for the New York Telephone Company for a year after high school to earn tuition money, and once at IC she needed a job to cover room and board. Fortunately, the legendary Ben Light ’37, M.S. ’47, Ithaca College’s director of admission, awarded her a $200-per-year scholarship and secured her a job in the dining hall.

An injury in 1955 threatened her studies, and illness in 1957 interrupted her senior year. Fran credits the music faculty with helping her through these setbacks. “Joseph Tague was the finest piano educator a student could have,” she says. “When I injured my right hand, he found left-hand piano pieces for me.” Other faculty members who had a special influence on her studies were Celia Slocum-Blair ’28, Helene Wickstrom ’38, and Dean Craig McHenry ’30, M.S. ’46. “Ithaca College,” Fran avers, “is the best investment I ever made.”

When she and her new husband, Thomas E. LaPlaca ’58, M.S. ’67, accepted positions at Fair Haven Union High School in Vermont in 1958, she was 11 credits shy of a music education degree. She taught part-time in physical education and part-time in music, while Tom coached and taught physical education. The experience drove her to go back to school. Ithaca College required residency during senior year, and luckily the Fair Haven school board granted her a leave of absence; she went home on weekends. After earning her degree she returned to Fair Haven as choral director and piano instructor — posts she still holds.

Ron Ryan, superintendent of schools in Addison Rutland Supervisory Union, says that Fran exemplifies and redefines what it means to be a musician and educator. “After teaching for 49 years,” he says, “she still exhibits the energy and enthusiasm of her first day on the job.”

In 1979 Fran added two junior high schools and the Select Vocal Group to her responsibilities. She has adjudicated for the Green Mountain District Music Festival since 1988 and the Vermont All State Music Festival since 1996. In 1994 several former students asked her to help organize an alumni chorus. She agreed, but would not accept payment. “This is a way for me to give something back to the profession and community I love so much,” Fran says. The group has expanded to become the Community/Alumni Chorus.

Such grace and loving kindness come despite — or perhaps partly because of — Fran’s own personal losses. The LaPlacas had five children, but their first, John, was born with serious heart problems and died in infancy. Her husband of 37 years, Tom, died in 1995 of stomach cancer. Yet Fran remains positive. “My children, my religion, and my music,” she says, “continue to be my strength.”

Her extraordinary service to the teaching of music has garnered her well-deserved recognition. In 1995 the University of Vermont named her one of Vermont’s outstanding teachers. In 1996 she received the 21st Century Publications Educator of the Year Award. And last May she was inducted into the Vermont Principals’ Hall of Fame, the highest honor for educators in the state; Tom was posthumously inducted at the same time.

At 72, with a half century of music teaching behind her, Fran continues to share her love of music with new students and chorus members. Phyllis Burlette, one of Fran’s former students and now librarian at Fair Haven Union High School, speaks for generations of students: “Fran LaPlaca is a genuine role model and exemplar of high standards — one of those special teachers whom students and colleagues never forget.”

Watch a video of Fran playing and being interviewed at  http://www.talk-pix.com/musicians/laplaca.swf (for photographer Richard Alcott’s ‘Talking Pictures’website). 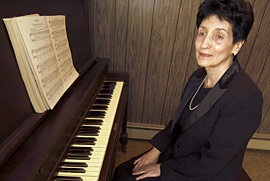 Fran at the piano she’s had since fifth grade