On September 17, members of the Ithaca community and the region at large gathered in Emerson Suites to attend a half-day program focusing on the benefits of ongoing research in clean energy. “The Clean Energy Summit: Reimagining Upstate New York’s Energy Future” brought in several guest speakers who are experts in their fields. The event was sponsored by IC and several organizations in the area.

Moderated by Mary Ellen Zuckerman, dean of the School of Business, and Beth Ellen Clark Joseph, chair of the Department of Physics and coauthor of the Ithaca College Climate Action Plan, the program consisted of two panels and a closing keynote address by Congressman Maurice Hinchey.

The event was called a summit because it combined different areas of study. The first panel joined the worlds of business and economic development with a discussion of what a clean energy future would look like in upstate New York — from new technologies and partnerships to green-collar jobs and financial impacts. The second panel showed the world of scientific research in clean energy, and the keynote address gave a governmental perspective.

Many groups across campus and across upstate New York collaborated to make the event a success. Some sponsors had exhibits in the north foyer of Campus Center, including the Alliance for Clean Energy New York, Blue Springs Energy, Cornell Cooperative Extension of Tompkins County, Ithaca College Department of Chemistry, Ithaca College Dining Services, and Sustainable Tompkins.

President Tom Rochon opened the event by recognizing some of the ways IC is environmentally conscious. Ithaca College has been a world leader among colleges in constructing buildings to meet LEED platinum standards. LEED platinum is the highest level of certification for sustainability granted by the U.S. Green Building Council with respect to the construction process, the materials used, and the energy efficiency of the resulting building. The School of Business was the first college or university business school to receive platinum LEED certification, and the Peggy Ryan Williams Center is in the process of acquiring it.

“Think about what that says about the unity of business activity and the need to be sustainable,” Rochon says. “It puts us in a very unique position [as a college].”

In addition, IC has been awarded two Energy Star certifications for the Clarke and Hood residence halls. The connector bridge between Dillingham Center and Job Hall has also been certified as LEED gold.

Congressman Hinchey showed his support for the College in his closing keynote address.

“Ithaca College students, faculty, and staff have demonstrated an amazing commitment to sustainability and the desire to have clean sources of energy developed right here in New York,” Hinchey says. “I can’t think of a better place to hold this forum on a topic of critical importance.”

“I feel that we are creating citizens of the future who are going to enable us to move forward,” Rochon says about the College’s environmental studies and sciences offerings. “I think that this summit is an extension of that commitment.” 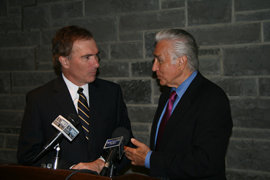