ZZ Packer advises students to immerse themselves in their writing.

Smooth, sonorous, and strong-worded, short story writer ZZ Packer gave a reading as part of the Distinguished Visiting Writers series in September. Packer is the author of the short story collection Drinking Coffee Elsewhere, which was a PEN/Faulkner finalist and a New York Times Notable Book.

Named one of America’s best young novelists by Granta, Packer has yet to release a novel. She’s still writing her first. Titled The Thousands, it follows Buffalo Soldiers during Reconstruction.

Packer read an excerpt from The Thousands and her short story “Brownies,” included in Drinking Coffee Elsewhere.

She has been at work on The Thousands for six years, and, as she quipped to Smithsonian magazine: “Now I respect bad novelists, because at least they’ve finished.”

The reading was sponsored by the Department of Writing in the School of Humanities and Sciences. In her introduction, assistant professor of writing Eleanor Henderson described Packer as a tenacious writer who was rejected 17 times from the New Yorker before being published.

“Good isn’t good enough,” Henderson said. “Packer teaches us that if you’re really in it for the long haul, you keep your eyes on the page.”

Packer is the recipient of a Guggenheim Fellowship and has served as the Stegner Fellow in Fiction at Stanford University. Her work has been featured in Harper’s, New York Times Magazine, Essence, and O, the Oprah Magazine.

After the reading, Packer took questions from the audience and described the research and writing process for The Thousands as extensive. She visited libraries across the country, eventually ending up at the National Archives and the Library of Congress. Her research also led her to speak with the descendants of figures she has based characters on. Examining the history of the time was so absorbing that she eventually took a break.

Packer advised writers in the audience to be comprehensive in their storytelling. “Writing is this process that involves your senses on every level,” she said. 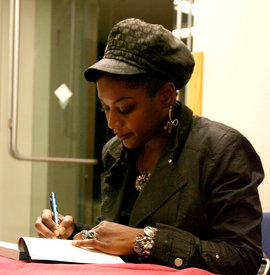