American kids are obsessed with thinness, yet more and more of them are overweight, if not obese. They try myriad weight-loss schemes, yet nothing seems to work. This is the panorama Abby Ellin, New York Times columnist and author, explores in Teenage Waistland: A Former Fat Kid Weighsin on Living Large, Losing Weight, and How Parents Can (And Can’t) Help (Public Affairs, 2005).

In writing the book, Ellin, who has an IC undergraduate degree in television-radio and an M.F.A. in creative writing from Emerson College, conducted hundreds of interviews with parents and children. She looked at inpatient hospitals that treated obese kids and a boarding school for the overweight. She talked to kids who’d had gastric bypass surgery. She explored the “fat-acceptance movement,” which claims that you can be both fat and healthy. But some of the most telling information came from own her experiences as a teenager, when her grandmother told her not to visit her in Florida until she lost 10 pounds.

Four years later, at age 16, when her grandfather died and left her a small amount of money, Ellin used part of it to pay for what she calls “fat camp.” The regimen included strict dietary restrictions and the dreaded weekly weigh-in. Under those conditions, she says, “you can’t not lose weight.”

Ellin lost 13 pounds during her nine weeks at the camp, but that wasn’t the end of her struggle. “Camp fostered an obsession with food because we were deprived.” She kept the weight off for one year but gained roughly 25 pounds in her freshman year at IC.

“People know that if you want to lose weight you exercise more and eat less,” she says. “But that’s not easy. Nobody can instill motivation and self-control. You really have to want it.”

Ellin blames today’s bulging youth waistlines largely on changes in lifestyles. “Partly, it’s the fact that schools cut back on recess and physical education,” she says. “Partly, it’s the ‘supersizing’ of food. Kids are playing computer games and texting, so they’re not outside. Plus, families need two incomes. With both parents working, it’s easier to bring in a pizza for dinner.” And, she says, self-control is tested when there are so many opportunities and incentives for ingesting fattening foods, and so many marketing dollars spent promoting fast food.

Her advice to parents is simple: “Love your children, don’t obsess on food as long as they’re healthy, try to make sure they get exercise, and set a good example.”

Ellin resolved her own weight issues by ending her fixation with food and eating. Now quite thin, she has competed in a triathlon and recently climbed Mt. Kilimanjaro, Africa’s tallest peak. She never weighs herself, even when she goes to the doctor.

“Part of the reason I overcame my weight problem is that I got really bored thinking about food and weight all the time,” Ellin says. “There were so many other things I could think about rather than what I’m eating.” 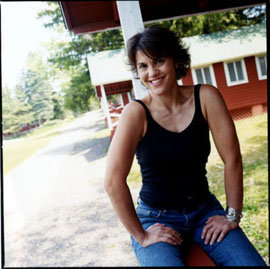