As a high school senior, Alexander Stuart ’20 was torn between two realities: He knew that IC’s renowned School of Music would be the best thing for his education and career, which made it his top-choice school. But he was also cognizant of the high financial cost that comes with attending an elite, private institution.

Stuart’s choice was made a bit easier, however, thanks to the trio of scholarships he received. The benefits of this aid paid off immediately and will continue throughout his time on South Hill.

“I wouldn’t have been able to attend Ithaca were it not for these scholarships,” he said. “They’ve lessened my financial burdens. So rather than having to spend my summers working as a lifeguard or camp counselor, I can focus on getting music internships, which is going to make my resume stronger when I graduate.”

As a student in the sound recording technology program, he’ll also be able to study for a semester in New York City as part of the ICNYC program.

“It’s the city that every artist wants to be in, and making connections there while gaining first-hand experience is going to be invaluable for my career,” he said.

He says he wants donors to know that scholarship recipients genuinely appreciate their generosity.

“I can speak from experience and say that the students who earn scholarships don’t brush them off,” he said. “It’s one of the best forms of positive reinforcement there is because it tells you that there are alumni who want you to succeed and have a great college career, just like they were able to. It’s something I’d like to pay forward when I get the opportunity.” 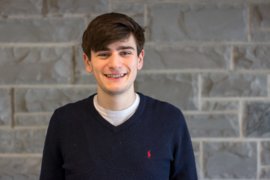