Starting this spring, alumni will have a chance to stay in the heart of New York City at discounted rates. At the same time, the College will expand its Ithaca College New York City (ICNYC) program for current students.

Ithaca College has entered into an agreement that provides access to a first-class hotel in the financial district for alumni, parents of current students, students, faculty, and staff. Rates are typically 25 percent lower than at similar hotels in Manhattan. Those affiliated with the College will also be able to rent restaurants for special functions, including a rooftop restaurant with views of the 9/11 memorial reflecting pools.

The hotel is part of a group of four-star, membership-based facilities with boutique-like amenities in prime downtown locations owned by Club Quarters. The agreement is specifically for the Club Quarters World Trade Center location, though alumni and parents can also stay at Club Quarters locations around the country and abroad, including Philadelphia; Chicago; Washington, D.C.; Boston; and London. To get the discount, call or visit the website and use the password, Ithaca. The agreement also includes a classroom and meeting space for students participating in ICNYC, which derives from one of the core initiatives of IC 20/20, the College’s strategic plan.

Students participating in ICNYC gain hands-on experience through internships and take courses that draw on the resources offered in New York City.

This spring 22 students studied and worked in the Big Apple as part of the pilot program. Students from the Roy H. Park School of Communications and the School of Business interned at Saturday Night Live, Hearst Magazines, Nike, PricewaterhouseCoopers, the Late Show with David Letterman, the City Parks Foundation, and others. They took courses such as Art & Architecture in NYC, where they went to museums across the city, and The Art and Science of Direct Marketing, taught by Michael Kaplan ’85 at G2 Communications. They also took online courses toward their majors and met once a week for an internship seminar, where they had a chance to talk about the ups and downs of interning in New York City.

With the new agreement, students will be able to meet at the Club Quarters World Trade Center for classes, and some will have the option of staying in the hotel’s extended-stay accommodations for an additional cost. The ICNYC program will expand next fall to include approximately 50 students from nine areas of study. The courses ordered in New York City each semester will vary to encourage students from a range of academic programs to participate. More information can be found at ithaca.edu/icnyc.

Andrew Steedman ’13 participated in the pilot program and had a sports marketing internship with Madison Square Garden. While the media was all abuzz with Linsanity, he was this close to the Knicks point guard during pregame warm-ups.

“The best thing I’ve done in the city is take guests and clients onto the court during pregame Knicks warm-ups,” Steedman said. “People are so excited to go courtside, so being able to give them that opportunity is pretty special to me. Plus, I’m gaining terrific insight into the world of sports marketing and meeting a ton of great people along the way.”

If you are interested in offering an internship opportunity to a student in ICNYC, visit ithaca.edu/careers/connections, or e-mail careers@ithaca.edu.

To book a room with Club Quarters, visit clubquarters.com or call 203-905-2100 and use the password, Ithaca. To find out about additional alumni benefits, visit ithaca.edu/alumni/benefits. 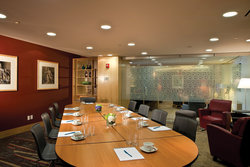