On October 1, Ithaca College hosted its annual ALANA banquet, to celebrate the success of students at the College who identify as Asian, Latino, African, or Native American.

This year’s distinguished alumni speaker was Billy Hall ’84, vice president of programming for TNT and TBS.

Hall’s job at TNT and TBS involves scheduling shows like The Closer, Rizzoli and Isles, and Conan. He decides what the shows are going to be and where they are going to go in the schedule.

“It’s mainly focused on where the audience is and where the competition is,” he said. “My job is to figure out how we can reach the biggest audience at the best time.”

Hall said many of his experiences at TBS and TNT have resulted in good surprises, like the success of The Closer.

“I always say we like to nourish a show, so it can flourish,” he said. “We make sure the shows are on at the opportune times and that we promote them as well as we can.”

Hall said that he had not intended to go into television programming when he was at Ithaca College but realized through his experiences that it was what he loved. He spoke about his experience as the only African American in some of his work environments and how he used that to his advantage.

“My hope is to inspire some of you to realize that you have a lot of untapped potential,” Hall said. “You are at the beginning of your journey, and you need to give everything of yourself to the world and to your various industries.”

Yolanda Clarke, director for Academic Enrichment Services, said the students were receptive to his message.

“Students heard from Mr. Hall how important it is for ALANA students to see their uniqueness in a positive light,” she said. “Students love being celebrated for their hard work, and Ithaca College is committed to highlighting the achievement of ALANA students here.” 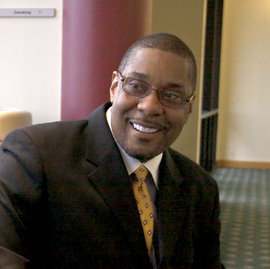