“Being an athlete was the most important thing for me in college, because it gave me an instant family and an identity away from home. Sports kept me in college.” As a 17-year-old freshman at Ithaca College, John Baumann ’72 says, “I was truly the most homesick kid in the world. I did not want to be there. But my parents wouldn’t let me come home, thank God.”

That first year at college can be a tough one, Baumann says. “I really didn’t know what I wanted to do.” Thinking he’d be a teacher, he became a general studies major, taking a combination of courses in English, math, and history. He was also a three-sport athlete that first year, which he admits may have had an impact on his grades. Between football, basketball, and baseball practice and games, he didn’t have much time for studying. But his mother, his football coaches, and Father William Graf, the College chaplain who worked closely with the football team, gave him the push he needed to keep from flunking out.

“Father Graf watched over me,” Baumann says. In fact, it was Graf who gave him his first job after college, teaching at a Catholic school in Rochester. Baumann taught seventh and eighth grade math, social studies, English, religion, and biology. He also coached the high school football and baseball teams. “Father Graf said he needed help, and I felt I owed him. It was the most wonderful experience in the world,” he says.

When Baumann had trouble with a lesson plan in, say, biology or math, he called on students’ parents who were working in the field. They were more than glad to help, he says, often coming to class to teach the lesson themselves. One of those parents suggested that Baumann interview for a job at IBM. At first he declined, but he was eventually offered twice his teaching salary to sell mainframe computers — an offer he couldn’t refuse. Baumann stayed at IBM for 17 years, during which time he was chosen to participate in a scholarship program that allowed him to earn his M.B.A. at Columbia University.

John Baumann is also still an athlete. He plays tennis, golf, and basketball, even after several knee surgeries. And for many years, since even before his son, John, became a high school basketball player, Baumann has helped coach high school baseball and basketball in his hometown of Westport, Connecticut. In 2000 he volunteered to drive some of his son’s friends who were considering Division III schools to Ithaca. The trip eventually led to his joining Ithaca’s Athletics and Events Center National Committee. “I hadn’t been back to Ithaca in 20 or 30 years,” he says. “It was apparent that the athletics facilities were almost exactly the same as when I was a student. My son’s high school had facilities far superior to Ithaca’s. And my daughter’s college, Emory University, had much better facilities, too. It was apparent that Ithaca was by no means keeping up. Not even close.”

Despite that, all five students on that recruiting trip eventually ended up at Ithaca — three of them straight out of high school, and two as transfer students. He says it may have had something to do with the fact that he had coached them all, and they had heard his stories about Ithaca and knew how much Ithaca had felt like home for him. Or it could have been the fact that Ithaca’s is a winning program and a great school academically. “It certainly wasn’t for the athletic facilities,” Baumann says.

“If you’re going to maintain a high level of competition, it’s all about getting the highest-caliber athletes,” Baumann notes. “But you’re not going to do that with poor facilities.”

That’s why he has made his own gift to the A&E Center, to give back to the community that supported him as a student. “I feel I owe them a lot,” he says. 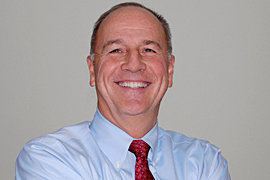 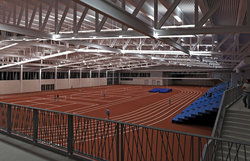 
Artist's rendering of the future A&E Center, courtesy of Moody-Nolan