Holly Buchanan ’07 teaches marketable crafts skills to South African students at risk of sinking into a life of crime.  by Karen Hwa

An instrument made of two cut-up soda cans. Flip flops crafted of cardboard, foam, and fabric scraps. To Holly Buchanan ’07, such creations, made by rural South African youths, are an immense artistic achievement. “This was completely new to them,” she says. Few had ever even attempted a drawing before Holly helped them explore not only painting and drawing but photography, bookmaking, and functional crafts.

Holly coordinates and teaches in the art program in the Thanda After-School Program in Umtwalume, a beach town in the province of KwaZulu-Natal on the eastern coast of South Africa. Thanda (Zulu for “love”) is a nonprofit organization whose mission is to support the area’s many orphans of AIDS and other vulnerable children. It offers K-12 students the opportunity to gain skills in computers or art or to participate in sports. “We try to give everyone something to do,” says Holly, who helped launch the After-School Program in January 2008.

Without the program, the children would likely be drawn into drug use and crime. Almost a quarter of South Africans are unemployed. The families of the students in the After-School Program are “lucky if they have one person working to support them,” says Holly. “They’re probably earning about 1,500 rand [approximately $143] a month, and usually supporting up to 10 to 15 people on that. Many families don’t have access to food and will eat one meal a day of rice.” Such poverty can lead to crime (most often petty theft) and drug abuse (alcohol, marijuana, inhalants). “The after-school program,” says Holly, “takes away their idle time—when they’re bored and desperate—[which helps prevent] them from making bad decisions.”

Some 235 students are participating in the After-School Program, about 70 elementary and middle school and the rest high school students. Last year Holly worked with 20 high schoolers, some of whom live at the Sacred Heart Children’s Home, where the After-School Program is based, to expand their ideas of what art is, or could be, and develop their means of creative self-expression. Her greatest challenge was trying to counter a different educational system: “Everything here,” she explains, “is based on memorization and repetition.”

Holly committed to community service at Ithaca College, where she majored in anthropology and art. She cites anthropology professors Jack Rossen and Brooke Hansen — and particularly their work on the Cayuga Nation’s SHARE Farm — as key influences. They showed her how to take learning out of the classroom and transform it into activism. Art professor Harry McCue gave her confidence as an artist and served as a role model for a working artist.

Her former professors are similarly impressed with Holly’s achievements. “We’re proud of her and her work — and how much she cares about changing the world,” says Rossen. “As anthropology professors, we strive to make students care enough to go out in the world and dedicate their lives to making a difference.”

Holly spent her last semester in India and Bhutan through the School for International Training. After the program she traveled to Tibet and Nepal, where she visited an orphanage for disabled children — an eye-opening experience that influenced her decision to work with kids. That goal, along with her interest in art and travel, came to the attention of Angela Larkan, the executive director of the Thanda After-School Program, through Holly’s close friend Sarah Brenner ’07. Angela recruited Holly to run the art program, and Holly traveled to Africa with Sarah, who heads the Youth Education Program.

Holly will remain with Thanda until July, as she develops an entrepreneurship program to help graduated students turn their artistic skills into marketable ones that will tap into the demand for crafts locally and in the nearby city of Durban, an active tourist destination.

Perhaps one day the soda-can instrument will accompany Zulu dances throughout the province, South Africans with few resources will be able to make shoes for themselves, and the students who created them — like Nqobile, who made the soda can instrument, and Hlengiwe, who made the flip flops — will have newfound pride and financial independence.

That is Holly’s hope. After spending time at home in Portland, Oregon, she plans to continue working in community development, probably back in South Africa, India, or Bhutan or working with Native American populations in the United States. “I’d like people to know,” she says, “that there are a lot of ways you can help by realizing the responsibilities we have as global citizens.” 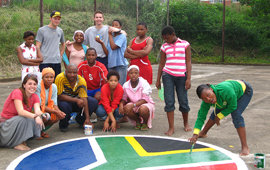 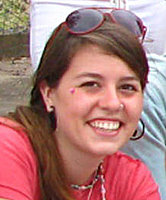