From urban cowpoke to gang member, Matt Cavenaugh ’01 continues to stretch as a performer.  by Barbara Adams

Musical theater isn’t all razzle-dazzle, as Matt Cavenaugh can attest. In his third Broadway musical Cavenaugh found himself  “just pulling on a sock and continuing to speak, no posing — just being real and human,” as he puts it. Acting, as it were, like an ordinary guy.

Cavenaugh was playing a young teacher planning his wedding with a girl from a Bronx Irish working-class family, circa 1953. The 2008 show, A Catered Affair, based on a Bette Davis movie, was written by songwriter John Bucchino and actor Harvey Fierstein — who starred, along with Faith Prince, Tom Wopat, and Cavenaugh.

“It’s an intimate, ‘quiet’ musical,” Cavenaugh says, “a simple human story that brings a lot of knowing laughter from the audience, as if they’re thinking ‘I’ve been there before, and that was hell.’ Singing is just an extension of speech. There are no big production numbers telling you what to feel.”

Cavenaugh believes this naturalistic approach moves the musical genre forward. “I totally dig it,” he says, “when a musical plays against the perceived rules of what a musical should be.”

And even classics, like West Side Story, the ground-breaking 1957 musical based on Shakespeare’s Romeo and Juliet, get reinvented. This spring, original writer Arthur Laurents is directing a heralded bilingual revival incorporating new material. The Puerto Rican gang, the Sharks, will speak almost entirely in Spanish, thanks to the collaboration of original lyricist Stephen Sondheim and In the Heights writer-actor Lin Manuel-Miranda. Cavenaugh has been tapped for the lead role of Tony, a member of the rival Jets gang. “This production is very special, historic,” Cavenaugh says. “I’m incredibly excited and feel very blessed.”

In 2003, only two years after graduating with his B.F.A. in musical theater, Cavenaugh was cast as Bud, the hunky male lead in Urban Cowboy (John Travolta’s role in the film version). The short-lived show brought Cavenaugh enormous exposure because his image — abs bared — graced billboards and ads all over New York. Variety critic Charles Isherwood called him “glisteningly handsome . . .  with a million-dollar smile.”

“I was the poster child for the show,” the 30-year-old Cavenaugh says, wincing, “and it got the worst reviews in town!” The show’s closing was tough, Cavenaugh admits, but forced him to decide how he wanted to be defined as an actor. “Failure made me a better artist and person,” he says. “That’s when you learn.”

More learning followed as Cavenaugh toured in Thoroughly Modern Millie, then acted in some soap operas and regional plays. His second Broadway role was dual: In the first act of the 2007–6 hit Grey Gardens he played a suave young Joe Kennedy Jr., and in the second he played Jerry, a poor kid from Brooklyn who works for two wealthy, eccentric recluses, a dysfunctional mother and daughter. “I was a character actor,” Cavenaugh, who had been used to playing handsome lead roles, notes appreciatively. “I don’t get to do that often.”

Cavenaugh flourished working under Grey Gardens director Michael Greif. “He’s phenomenal,” Cavenaugh says. “He gives an actor space and time to play and discover.” Cavenaugh was also inspired by the show’s stars, Tony Award–winners Mary Louise Wilson and Christine Ebersole. “They were fearless,” Cavenaugh says. “Nothing was the same two nights in a row. That’s the wonderful, and scary, part of [stage] acting––living in the moment, being open to possibilities.”

Though shifting between the two characters was challenging, the actor found it even harder to shift accents. Cavenaugh, who lost his native Arkansas accent while training at IC, admits, “I have an affinity for the ‘Kennedy dialect,’ but it’s tough to drop.” Even more demanding was working 18-hour days, from 7:00 a.m. TV soaps calls through the evening theater performances, so he drew on his training. “At IC,” Cavenaugh says, “we learned to strengthen our technique, so when we’re sick or exhausted or have our mind on other things, we can rely on technique to get us through.”

The actor, who returned to campus this fall to share his experience with students, also credits the theater program for encouraging creativity: “They don’t try to create acting robots, but artists,” he says. “There’s no one ‘right’ or ‘correct’ way at Ithaca.” 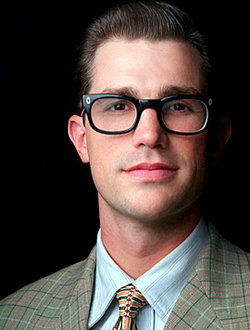 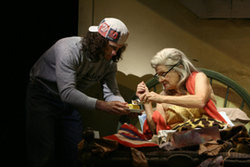 Matt Cavenaugh as Ralph Halloran in the 2008 Broadway production of A Catered Affair, top, and in his dual Grey Gardens roles in 2006: Jerry (with Mary Louise Wilson, above) and Joe Kennedy Jr. (below)

MSNBC: Backstage with Matt in West Side Story

Matt takes us on a tour of the Palace Theatre during previews for West Side Story, which opened on March 19, 2009. Matt plays Tony in the long-awaited revival of the beloved classic: