Ladies and gentlemen, welcome to the oh-so-long presidential election season.

It seems like one election has barely ended when a new campaign begins, turning political cynicism into a year-round sport.

But there are a lot of good, hard-working peo­ple in American politics. The media is saturated with stories of misdeeds and not enough about the people who make the system work.

Several Ithaca College graduates work tirelessly behind the scenes in the public and private sectors to keep the ship of state on an even keel. Reel in that cynicism and take note of the work done by Georgia Bills ’74, Dan Lamb ’86, Les Bernal ’91, Sam Adams ’11, Tammy Mayberry ’97, Rob Bluey ’01, John Balduzzi ’01, and Rob Flaherty ’13.

Represented among them are many of the dispa­rate roles in American politics—lobbyists, consul­tants, communicators, or staff members—besides the ever-visible politicians.  As you make your way to the polls on November 6, keep in mind all the people, including IC alumni, who toil behind the scenes to keep the nation moving forward. 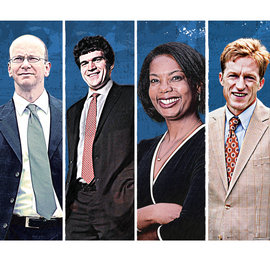