An IC professor studies how zebrafish react to anxiety triggers in hopes of finding better treatments.

While some students grab books off library shelves to research their assignments, Elitsa Stoyanova ’14 navigates her way through an aquatic library of fish to study the relationship between genetics and anxiety.

“Since we can’t do experiments on human brains, we use these model organisms to see what happens,” she says.

Each book-sized tank holds about a dozen fish averaging two inches in length and named for the parallel black stripes on their bodies: zebrafish. The fish are part of assistant professor of biology Ian Woods’s lab, where he and his students are studying their responses to anxiety triggers. Their work may eventually lead to better treatments for anxiety disorders.

“If you look at current treatments for anxiety disorders, [the approach is] a bit like taking a sledgehammer to a mosquito."

More than 40 million Americans have some sort of anxiety disorder during their lifetimes, making it the most common mental illness in the United States. Medications for these types of disorders have been overprescribed, misused, and subject to overdose. For example, emergency room visits related to the use of Xanax and related drugs doubled from 2005 to 2011, according to the U.S. Substance Abuse and Mental Health Services Administration.

“If you look at current treatments for anxiety disorders, [the approach is] a bit like taking a sledgehammer to a mosquito,” said Woods. “The treatments may work for anxiety, but they can have a lot of side effects. What I want to do is get more specific and say, ‘Okay, can we take a more targeted approach?’ That’s why I’m focusing my research on neuropeptides.”

The wiring of the brain

“There’s one population of voles that inhabits prairies and another that lives in meadows. [The two species are] very closely related, but when prairie voles mate, they’re bonded for life, while the meadow voles are more swinging. It turns out that this profound difference in behavior is due to relatively small differences in neuropeptide messages in the brain.”

Although voles provide researchers with a way to study neuropeptides, Woods found a member of the minnow family that is more amenable to research activities than rodents for several reasons. These transparent zebrafish have embryos that develop outside their mother’s body, giving Woods and his student researchers a glass-bottom-boat view of the way the zebrafish’s nervous system develops and functions.

“Fish have the same neuropeptides as humans, and they mostly do the same things in the brain,” Woods said. “We can never faithfully model a complex human behavior like anxiety, but when we’re trying to figure out how the brain works, it’s useful to see inside a fish. Once we get the embryos under the microscope, we learn all sorts of things.”

Before looking through the microscope, though, Woods and his highly trained students have to genetically alter the zebrafish.

“A gene is the chemical blueprint that can influence how neuropeptides and other messages in the brain work. Once we’ve extracted a specific gene, we can disrupt, amplify, or alter it—and then replace it. By observing the ensuing behavioral changes in the fish, we know how that replaced gene changed the message in its brain.”

“Genes don't typically cause anxiety, but they can make organisms more susceptible."

To know which specific gene to modify and where to find it, Woods relies on his earlier research at Stanford and Harvard Universities. Before arriving at IC in 2011, he investigated the development and function of sensory systems. He wanted to determine which specific nerve cells sensed heat, cold, pain, and various degrees of touch. To find out, he traced the circuits back to the original schematic: the genes.

Using zebrafish as models for his research, Woods came up with a list of more than 1,000 genes and about 10 neuropeptides that were in some way responsible for these sensations. That winnowing process opened his eyes to anxiety studies.

“The molecules I identified made significant behavioral differences in how active and inactive the fish were and how strongly they responded to various stimuli such as heat, light, and chemical irritants like wasabi,” Woods said. “We refer to those high-energy and low-energy situations as arousal states. Anxiety is often characterized as inappropriate or prolonged arousal.”

Anxiety disorders have a sizeable genetic component. And, while finding ways to treat anxiety wasn’t what Woods originally set out to study, his discovery process has led him down a road that has the potential to improve people’s lives. Though the genetic causes of anxiety remain largely unmapped, Woods hopes to gain a better understanding of the disorder’s ultimate causes within the brain by identifying the genes associated with it.

“We do that by isolating a male and female fish—putting them in their own suite, basically. They do their thing, then lay their eggs, which we keep in tanks arranged on shelves labeled according to the genetic alteration.”

When each group of altered fish hatches, they’re observed by a computerized camera system that records every movement of every fish and analyzes responses to stimuli such as slight changes in water temperature, decreases in light intensity, or mild chemical irritants such as mustard oil, which gives wasabi its “kick.”

The experiments can be compared to slightly raising the temperature of a room by a few degrees and observing as its occupants grow more agitated. Fish exhibiting anxiety-like behaviors, for example, will hug the walls of their tanks while other fish will swim toward the middle.

“Genes typically don’t cause the anxiety,” Woods said. “But they can make organisms more susceptible to environmental triggers that might elicit what we’d call an anxious behavior.”

The care and feeding of zebrafish

Woods estimates there are 3,000 fish in the lab at any given time, and they require care 365 days a year. Though an animal technician is on hand, the student researchers are responsible for feeding the fish, cleaning the tanks, and monitoring water chemistry. “It’s an honor and a privilege,” Woods said about the work students do with the fish because the focus and attention to detail needed to keep the lab operating are the same qualities required for thorough research.

The efforts of the students researching in Woods’s lab have received financial support from Dana internships, the Ford Science Research Fund, and other college-administered funding. Woods, meanwhile, has received support from the dean’s and provost’s offices, and he is also pursuing outside funding.

“Because anxiety behaviors are governed by the activities of many genes at once, the search for a so-called ‘anxiety neuropeptide’ isn’t going to be completed overnight,” Woods said. “But if we can find single pathways that contribute to anxiety and treat one specific process instead of hammering the whole brain, that’s a goal worth pursuing.” 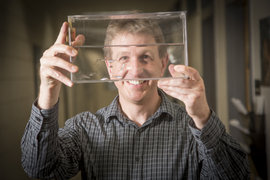 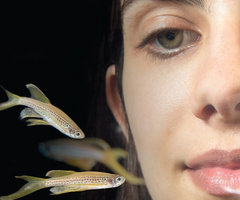 Ian Woods has a number of students working for him in his lab, many of whom have received funding.

• Rachel Noyes ’13 received funding from the H&S Educational Grant Initiative and the Ithaca College Annual Fund to help support the research she was working on in Woods’s lab.

• Haley Coleman ’14 presented her research at the National Conference for Undergraduate Research at the University of Kentucky in Lexington this past spring. She received funding from the School of Humanities and Sciences dean’s office.

• Elitsa Stoyanova ’14 received a Beta Beta Beta Research Award for her research project and presented her work at a national conference for the American National Chemical Society. She will begin a prestigious graduate program at Rockefeller University in New York City this fall.

• Sadie Schlabach ’15 received a Dana internship to conduct research in the lab.