Prevention magazine began publishing in 1950, with a message of wellness-based living that was, in many respects, decades ahead of its time. Today, the venerable magazine is more relevant than ever, with Americans’ passion for good food and nutrition showing no signs of fizzling.

Bethridge (Goode) Toovell is doing her part to move that trend in the right direction. Toovell joined Prevention in 2009 and recently became director of communications. She makes sure the brand stays in the minds of media outlets and opinion makers.

Part of her role entails promoting Cook!, a popular new monthly section of Prevention and on prevention.com, which makes fresh, seasonal food feel accessible by showing that it can be tasty, inexpensive, and easy to prepare. Last summer she helped develop a CBS Early Show segment featuring celebrity chef Rick Bayless. Toovell helped select the menu and identify the price points for the components to ensure a good fit with the Cook! mission.

At Ithaca College, Toovell’s main interest wasn’t food but film criticism. She was in the first class to enter Ithaca College’s newly formed writing department and found a lifelong mentor and friend in professor Barbara Adams, whom she credits with teaching her how to write about fine arts. “Criticism helped my path,” she says, noting that she still analyzes her topics like a journalist.

After IC Toovell held public relations positions in the magazine industry until her company downsized. She took the opportunity to earn an M.S. in corporate communication at New York University while working as a freelance public relations consultant.

Now that she’s back in publishing, she’s thrilled to be working in such a dynamic field.

“People are seeing how food plays a part in good preventative medicine,” says Toovell. “Where your food comes from, how to eat well—these are big topics. It’s an exciting industry right now; it’s the place to be.” 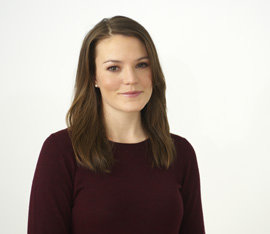