This summer, just 40 miles from Ithaca’s Freeman Field, two IC baseball alumni had a reunion at Falcon Park, home of minor league baseball’s Auburn Doubledays. But this time they were in different dugouts.

Wall signed a free agent contract with the Washington Nationals, whose Class A affiliate is the Doubledays. His first appearance with the team came July 27, in the finale of a three-game series against the Vermont Lake Monsters, the Class A affiliate of the Oakland As. Healy had just signed with the As and made his debut a month before.

Bomber coach George Valesente ’66 watched all three games proudly from the seats. “What a great moment for two fine young men,” said Valesente. “It was truly exciting to see them pitching against each other, especially here in Auburn where so many Bomber fans could see them.” 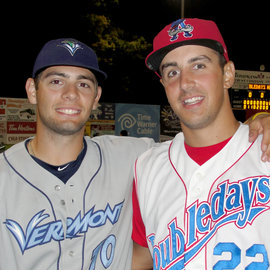